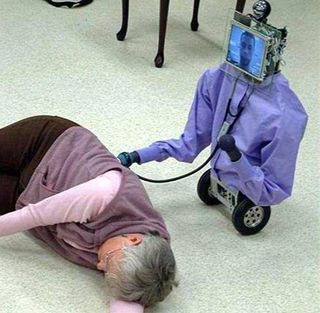 Other robots are available - this one tends to the sick

Japanese robot maker Tmsuk this week unveiled a metal man that will either land it in a lot of lawsuits, or put thousands of security guards on the job market.

The T-34 isn't a new kind of Terminator, instead it's a droid that can be controlled remotely by mobile phone as it patrols buildings at 10km/h. Tmsuk (it's pronounced "Tim Suck", by the way) plans to sell it as an extra layer of security within buildings that currently rely on human guards.

That security comes in the form of video-camera eyes that effectively make the T-34 a mobile CCTV system and the ability to shoot a net over anyone the robot fancies detaining.

If the idea of an operator at a distant monitoring station watching the robot's feedback on a mobile phone screen and then pressing a button to throw a net over someone suspicious seems ludicrous, that's probably because it is.