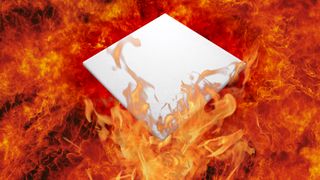 There will be eggs

Starlite could be the most valuable man-made substance ever created. It has the potential to revolutionise industries, save lives and change the course of human history. The applications for it are near infinite, no scientific mind has ever been able to work out how it works – and yet it has never actually been used for anything.

So what does it do, and why have you never heard of it? Starlite was invented during the 1980s by the unlikely Maurice Ward, a ladies' hairdresser from Yorkshire.

"We produced a material that was out of this world. It didn't burn, it didn't produce smoke and it intensified on its strength and its abilities"

It's a plastic that's able to withstand heat to an almost unimaginable degree. Ward never revealed how it was made, saying merely that it contained 'up to 21 organic polymers and copolymers, and small quantities of ceramics'.

In lab tests, it has withstood the heat from a nuclear flash. It can endure temperatures three times hotter than the melting point of diamonds. And it can be shaped and molded into almost any form.

Starlite attracted a lot of attention during the '90s after it made an appearance on the BBC's Tomorrows World programme. An egg was painted with starlite and then blasted with a blowtorch at 2,500 degrees Celsius. After several minutes, the surface of the egg was barely lukewarm, and the egg was totally uncooked inside.

"We wanted to create something that wouldn't burn and was halogen free," Ward told the BBC in 2010, suggesting Starlite could be used to solve the Deep Water Horizon catastrophe.

"In under a couple of years we created something and had it tested at ICI. By 1990 we produced a material that was out of this world, it didn't burn, it didn't produce smoke and it intensified on its strength and its abilities."

"We don't still quite understand how it works," said Ronald Mason, scientific advisor for the Ministry of Defence at the time. "But that it works is undoubtedly the case. I started this path with Maurice being very very skeptical of it. I became totally convinced of the reality of the claims".

Ward was so paranoid about the formula for Starlite being reverse engineered, he would never allow anyone to keep a sample, and his financial demands of anyone who wanted to use Starlite – including NASA and US and UK military – proved fatal to his efforts. He flat-out refused permission for anyone to license it, and in 2013, 30 years after it was invented, Starlite has never left the lab. Ward sadly died in 2011, and no one really knows what has happened to the formula. Some say his family keep it locked away, others claim it was a huge hoax the whole time.

So what exactly would Starlite be good for if it was ever deployed? We've come up with 10 ways in which Starlite could change the world we live in…

One hugely obvious application for this technology is in the construction of highly populated buildings like the ill-fated World Trade Centre in New York City. If the steel beams and support structures had been fireproofed with Starlite, it's highly likely that the buildings would never have collapsed. Deploying Starlight in the construction of floors and walls would also have limited the spread of the fire, enabling more people to escape, also preventing the release of toxic fumes that gave many people no chance of survival.

Imagine painting the outside of buildings in hot climates with Starlite, or incorporating it into building materials. It's such an effective insulator, it would be possible to keep buildings cool with minimal or even no air conditioning. Likewise, you could do the opposite – you could theoretically paint the inside of an Igloo with it and then light a fire inside – the igloo wouldn't melt but you'd be toasty warm.

Re-entering Earth's atmosphere is one of the most dangerous tasks that Astronauts have to undertake. 10 years ago, seven Astronauts tragically died when the Space Shuttle Discovery's heat shield failed and caused a catastrophic disintegration on live television. Starlite's imperviousness to heat would make it an ideal insulator for spacecraft in this way. NASA approached Marice Ward about Starlite for this very reason.

Dry climates in places like Australia and California are regularly subjected to devastating forest fires. People die and homes are destroyed. If you could paint your house in Starlite, you could create a perfect shield that would allow the fires to pass by without loss of property. And that's just the start – you could use Starlite in the manufacture of firefighting clothing and equipment in order to make impenetrable fireproof attire for firefighters.

Heat management in F1 and other racing formulas has always been a key factor in car design. Renowned F1 technology expert Craig Scarborough told TechRadar that Starlite would be a very attractive substance for a variety of reasons.

"Up until now anything heat resistant is either made from titanium or inconnel sheet (expensive) or glass-reinforced carbon ceramics such as Pyrosic (very expensive). Both of these materials can withstand up to 1,500C, which is about as hot as F1 exhausts and brakes get. The cheaper option for lower temperatures is adding heat reflective coatings to the usual carbon fibre parts. Due to either their heat resistance, cost or ability to be shaped, Starlite could be attractive if it could be made into shapes strong enough to withstand the loads and vibration on an F1 car.

"Two ideas immediately spring to mind. Currently F1 bodywork is made of carbon fibre, which then needs space and heat reflective coatings to cope with the high temperatures. A moldable material that can withstand these temperatures would make super slim, almost shrink-wrapped bodywork around the car's internals. This would provide far better aerodynamic performance. You could also develop a plastic exhaust pipe (or even engine parts). Being able to mold an exhaust to any shape, rather than make it with what's possible from bending and welding sheets of inconnel, would reap more power from the engine."

In the same way that Starlite might be attractive for F1 teams, it could also be hugely beneficial to aeronautical engineers who design aeroplanes. Maurice Ward often cited a Corfu-bound airplane at Manchester airport in 1985 that caught fire on the runway, killing all 55 people on board, as the inspiration for his invention. The main killer that day was the fumes from all the toxic materials burning. One of Starlite's key properties is that it's able to retard fire and heat without giving off any toxic fumes of any kind.

Uses for Starlite in the home are almost limitless. You could paint hot water pipes to insulate and save energy, while also improving safety by eliminating the risk of scalding. You could create highly efficient ovens or even magic baking trays that you could pick up straight out of a 200 degree heat. Yes, magic baking trays.

The British Atomic Weapons Establishment subjected samples of Starlite to forces and heat equivalent to 75 Hiroshima atomic bombs, and the material emerged charred but largely undamaged. This kind of heat shielding could be applied in all sorts of ways. You could cover tanks and dress soldiers in it, rendering them invisible to thermal imagery. Starlite has already proved itself totally impervious to powerful lasers, giving it even more relevance given recent developments in laser weapon technology.

Just imagine the possibilities if this 30-year old material could be incorporated into modern 3D printing technology. You could print almost anything you want, and it would be totally fire retardant.

Really, the applications for this material are unlimited, which makes it all the more baffling that it has never made it into a real product. Imagine using Starlite in a picnic case – you could make a hot meal and keep it warm for hours. Conversely, you could keep ice cubes frozen in the Sahara desert. You could drastically reduce manufacturing costs in factories by using Starlite instead of far more expensive heat-retardant materials.

But really, the most amazing uses for Starlite probably haven't even been imagined yet. And unless it finds its way out of a hairdresser's closet somewhere in Yorkshire, England, they probably never will.