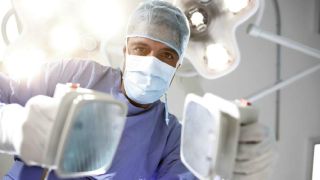 Google has revealed it's developing a new wearable, though it won't be for consumers.

Speaking to Bloomberg, Andy Conrad, head of the life sciences team at Google, explained the intended use for the health-tracking wristband, "... is for [it] to become a medical device that's prescribed to patients or used for clinical trials."

The wearable can measure pulse, heart rhythm and skin temperature, as well as collect environmental information like light exposure and noise levels, according to the report.

The information collected would be continuous, a feature Google believes will allow doctors to get a better view of a patient's health.

In development within the Google X division, the new health tracking wristband is still an experimental device that the search giant hopes could work as a preventative measure for health conditions.

Google X has had a focus on health-monitoring tech for a few years now, with projects including sugar level-monitoring contact lenses and using nanoparticles to track blood cells and protein in cancer patients.

The company will work closely with the medical and pharmaceutical industry to test and fine-tune the new wearable, with trials reportedly set to start over this summer.

Google will also be seeking to pass regulations in the US and Europe, so we likely won't be prescribed a Google health tracker by our own doctors for a few more years yet.