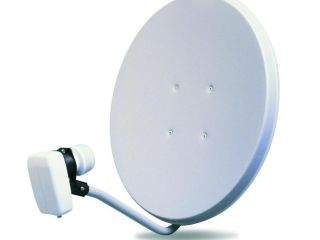 If Freeview can't handle multiple HD channels, satellite is perfect for the job.

After months on the back burner, the BBC's 'Freesat' project has taken another step closer to reality. The proposed system, which would be a satellite-based version of the current Freeview service, was provisionally approved back in February .

A month-long public consultation period about the project (conducted by the BBC Trust ) has now formally ended.

"The consultation on 'Freesat' has now closed," says the BBC Trust on its website. "The Trust will consider the responses in detail at a future meeting before reaching a final decision on the proposal, which it will publish in due course."

The idea for Freesat was originally put forward by BBC management, although the BBC envisages the system as a joint venture between itself and other public service broadcasters, such as ITV and Channel Four.

What's in it for us?

The main benefit of the BBC's Freesat proposal is that it should be simpler for consumers to buy, much like Freeview is. But that's not the only reason to invest in a satellite platform. Due to the bandwidth restraints on Freeview, satellite and cable are currently the only technologies capable of pumping out free-to-view high-definition television.

If you want free HD now, you can already order a free-to-view package (also called Freesat) direct from Sky, paying for the set-top box, dish and its installation, which costs £150 up front (see www.freesatfromsky.co.uk ). Alternatively you can get an independent satellite dealer to install a digital satellite receiver to pick up any non-Sky channels. Our colleagues over at What Satellite and Digital TV magazine are a good first step.

Lapsed Sky subscribers who cancelled their pay-TV package after the minimum term can also receive the free channels, but they require a viewing card to see the likes of Channel Four and Five, which are non-subscription but scrambled to limit the channels being seen outside the UK (due to licensing issues). People who inherit satellite dishes when they move home (and get a used satellite receiver) are in the same situation, though viewing cards are available for a small charge.

The BBC's proposed Freesat service could launch before the end of 2007, although channels such as E4 and More4 (available for no charge on Freeview) are currently locked into a subscription bundle on Sky and might only be available on Freesat when the carriage contract is up for renegotiation.

Crucially, perhaps, Satellite is also being used for high definition TV broadcasts, including the BBC's own free-to-view HD channel, and the massive bandwidth available on satellite makes it a natural outlet for more free HD channels in the future.

Why Freeview HD could fail

The main terrestrial networks were all involved in the HD via Freeview tests in 2006. But the future for Freeview HD is uncertain because it depends on the analogue switch-off process and also on how the resulting spare capacity is allocated by the broadcasting regulator Ofcom .

According to the BBC, "The [Freesat] service would be future-proofed, through the designing in of high definition and personal video recorder compatibility."

So what happens next? The BBC Trust (which replaced the old board of governors) has already provisionally approved the Freesat proposal. Now that the public consultation period has ended, a final decision on Freesat is due in April 2007.

In its provisional statement about Freesat, the BBC said, "The Trust believes the service would create significant public value by offering licence fee payers an additional means to access digital services, including the BBC's digital television channels and radio services, which is subscription free and guaranteed to stay that way."

The BBC hopes that Freesat will be one of the ways viewers can receive a wider selection of channels, especially in areas where the terrestrial digital signal is poor or currently non existent.

As the BBC explained, "Of the 7 million homes yet to switch to digital, over half fall outside the Freeview coverage area. Inability to access free-to-view digital is an issue frequently raised by the public in its contacts with the BBC." Ian Calcutt