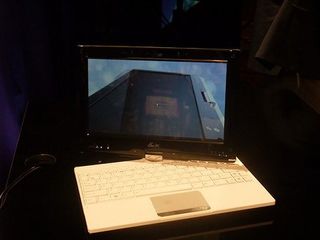 Asus used CES to launch a number of touchscreen products

Asus got touchy feely at its CES 2009 press conference in Las Vegas today, with the announcement of a number of products that utilise touchscreen technology.

While some of the demos shown should be filed under 'ultimate fail' – the company will want to forget it ever showed us its AI Touch Media not working – there were a number of touchscreen PCs announced which got the crowd worked up.

First up was the Eee PC T91. This touchscreen convertible Eee PC is something of a revelation. For a start, the demo we saw used Windows 7. Before we get all excited about this, it is something Asus is merely considering for its future Eee PC line-up, so an official Windows 7 netbook has yet to be confirmed.

As the T91 is a convertible Eee PC, the screen can swivel round and the computer can be used as a tablet PC, or PMP.

The EeePC weighs in at a hefty 2lbs, is just one-inch thick and houses an 8.9-inch LED backlight.

The whole thing is powered by an Intel Z520 Atom processor. The demo we were showed, used a T91 with 1GB RAM.

Price and street date are still to be announced.

Also announced, was the already shouted-about Eee Top. Built to bring touch computing to all parts of the home – from the kitchen to the bedroom Asus assures us – the touchscreen computer comes equipped with a AI Touch Media, which brings up fancy swivel graphics for your home entertainment files. The whole thing will run on a modded out version of Windows XP and come with a special touch-version of web browser Opera.

Asus also unveiled another type of touchscreen technology that the company is working on.

Working off of a N-Series laptop, Asus showed us a revolutionary touchpad, which was acts as a 5-inch mini touchscreen computer within the computer.

The ingenious little gadget works completely seperatley from the main laptop power, and you can watch movies off of it and project them to the bigger screen. This means lower power consumption and around 12 hours' movie consumption.

While all this is incredibly impressive, it's just a shame that Asus kept us all guessing about when this product will hit the shops.