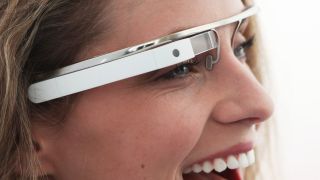 See, speak, hear... see a manipulated version of your hand

Google Glass is likely to include a touch-pad, camera, microphone and see-through display all rolled into one to fit on the bridge of your nose.

Google Glass is described as a "wearable computing device" in the document, comprising of a see-through display lens with a projector, a camera positioned on the extending side-arm and a touch-pad interface including a keypad.

Apart from the buttons and touch-pad, the glasses will also detect speech commands. Shout out a name of a friend, and it will open your contacts book. Start the engine of your car, and Glass could throw up GPS directions.

Even cooler is the mention of a "controller" which can determine the wearer's skin tone, hand shape and size based on an image of the wearer's hand.

The user interface for the glasses is located "outside of the field of view of the wearer", which means it is probably located near the temple of the user's head, along one of the arms of the glasses.

The patent, which names Google's David Petrou as the inventor, explains user interaction through an interface that "could be, for example, a touch pad, keypad, an arrangement of buttons, or any combination thereof".

For the sake of imagination, Google says it is considering using "coloured dots" for visual representations.

"Coloured dots may appear in response to physical contact or close proximity with the interface. Further, the dots may create an illusionary effect such that the wearer feels like that the interface is right in front of the wearer," the application reads.

Some illustrations, which you can see as part of the patent application show that the glasses include a microphone, a keyboard, a camera, and a touch-pad.

Winter is coming? No problem

It seems like Google Glass is also winter-friendly. Glass will detect the temperature outside and switch to a hands-free mode, in case the user is wearing gloves.

Glass will include "an antenna and transceiver device" for wired/wireless communications between itself and "a remote device or communication network". This could mean 3G and 4G networks, as well as Bluetooth and Wi-Fi.

This will probably allow connectivity between Glass and phones, tablets or other "wearable computing devices or a server in a communication network".