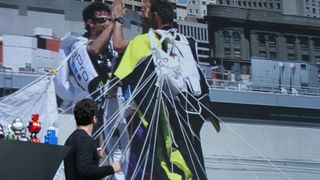 It's hard to believe a Wok was involved

It should come as little surprise that Google's skydiving-based demonstration at Google IO 2012 of transmittable, wearable digital glasses has become the talk of the tech town as of late.

However, in addition to generating actionable buzz for Google Glass – surely serving as the catalyst for developers to plunk down $1,500 for Explorer version – it's also raised another equally important question.

How'd Google pull off such a stunt?

According to published reports, Google had to get special clearance from the FAA for its big tech-filled dive through the air, in addition to cooperation from NASA, the San Francisco Mayor's office, San Francisco Police and Fire Departments, as well as a crafty technical solution for sun glare and 25 different cameras to get the demonstration just right.

When Google re-ran its skydiving session during an IO keynote, the specific techniques Google used to ensure a consistent signal for its free-fall demonstration were captured in the rear of the video stream.

According to Ars Technica's, here's how it worked: Google's skydivers jumped out of the plane and, immediately afterward, one of the two skydivers released a quick burst of smoke into the air.

On the ground, Google helpers holding amplification dishes aimed at the smoke and followed the divers as they plummet to the ground.

Yes, we said "amplification" dishes – Google hasn't disclosed exactly what it used to beam the signal up into the skies, but it provided a far better result than Google's first experiment which had employees attaching a Galaxy Nexus smartphone to the inside of a wok as a kind-of makeshift broadcast dish.

In essence, Google targetted the wireless connection – hitting its skydivers with a tight, narrow beam of amplified connectivity instead of forcing them to try and tap into a general "bubble" of a signal emitted from a traditional antenna setup.

That's how the divers are able to ensure a strong connection mid-flight, a feat that your average Google Glasses-wearing air enthusiast would likely not be able to replicate without a bit of help from the ground.

Of course, you can always try for yourself come 2014 – the time period Google's targeting for the public launch of Google Glass.

And if you've been one of the lucky attendees to make it to Google IO, you're only a $1,500 sign-up away from getting your hands (and eyes) on the first version of the glasses next year.