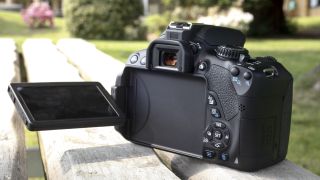 Canon has introduced the EOS 650D/Rebel 4Ti, the first DSLR to feature a touchscreen LCD, in a bid to appeal to new DSLR users.

Speaking to TechRadar, David Parry from Canon UK said: "We're trying to attract more people into photography, and having a touchscreen could bring more people in and help them make that transition from a compact camera to a DSLR."

Not only does the 650D feature a touchscreen LCD, it's also equipped with an 18 million pixel sensor, Digic 5 processor and hybrid autofocusing.

The 3-inch vari-angle touchscreen can be used to access the majority of camera functions, along with being used to set the autofocus point, or release the shutter.

Those used to using smartphones and tablets will also surely appreciate the pinch to zoom into playback images and the ability to swipe through images.

Although the Canon EOS 650D is currently the only DSLR camera to feature such a device, David Parry is hopeful that it will prove popular.

"I'd like to see it on more cameras," he said. "Maybe we'll see a reverse Formula One effect - where technology from the lower end of the range will trickle upwards onto the higher end."