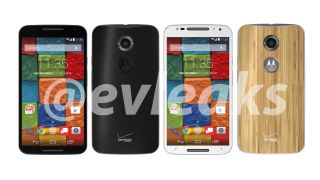 We're loving the wooden back, we have to say

Just when you thought he was out, they pull him back in. Well not entirely, but @evleaks has spilled one more phone leak as a retirement gift to us all - some alleged press shots of the Moto X+1.

Evan Blass took to Twitter to post the images, which give us a clear look of the device from the front and back. It all looks pretty similar to what we've already seen: there's the optional wooden back, the dual LED flash, and front-facing speaker.

As ever, Blass didn't divulge any further details on the phone, but rumours claim it'll come with a full HD 5.2-inch display, a 12MP camera, a 2.5GHz quad core processor, and 16GB of storage. Sounds good to us, though this may remain a US-only device for some time.

Everything will be revealed at Motorola's big September 4 event - and we'll be there to bring you the news as it breaks.