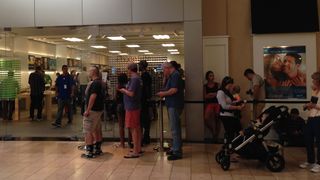 With these long lines, iPhone sales aren't dropping off just yet

Apple could be a one-trick pony and get away with it, as iPhone brand sales reportedly trumped the revenues of whole companies like Microsoft, Amazon and Dell.

During the last four quarters, meaning even before iPhone 5S and iPhone 5C launched, Apple's smartphone took in $88.4 billion (about £54.9b, AU$94.1b) on its own, noticed

That puts the imagined "iPhone Inc." above 474 other companies on Standard & Poor's 500 stock market index.

It fits right in there between banking giant Wells Fargo and oil corporation Marathon Petroleum. On the Dow 30, it would be the ninth-biggest stock, according to the report.

While Google controls nearly 80% of the smartphone market with its Android operating system, iPhone Inc. would even best its Mountain View rival.

If iPhone were its own company, however, there's another firm it would beat: Apple.

A spun-off iPhone Inc. would therefore best its own creator in this theoretical scenario.

The recent 9 million sales of the iPhone 5S and iPhone 5C during the first three days of availability is only going to further drive Apple's smartphone above the rest of its portfolio.

Maybe it's time for an iWatch to help diversify the company's producing offerings.