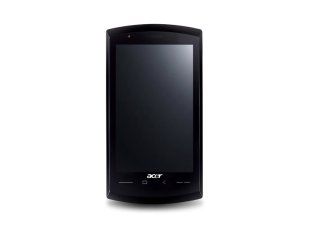 The new Acer F1... sorry, neoTouch is just days away

Acer has clearly had a good sit-down planning meeting with some creative types and decided that its forthcoming range of phones (the L1, C1, E1 and F1) just aren't exciting enough, so it has embarked on a renaming spree.

The new names are all a little odd, but the best of the bunch has to be the Acer F1, the 3.8-inch touchscreen flagship phone, which will now be dubbed the Acer neoTouch, according to online retailer Clove.

Don't ask us what the names mean -- we have no idea and as they're only currently being reported by Clove, we're waiting to hear if they will be the official monikers.

A number of eyebrows were raised at Acer when we spoke to them about a flagship phone being named the F1, especially as the company has close ties with Ferrari and has released a number of branded products with the car maker.

But no matter what it's called, we're looking forward to a closer look at the F1 / neoTouch with its 3.8-inch touchscreen, Windows Mobile 6.5 operating system and 1GHz processor on board.

Acer has already confirmed to us that the phone is coming in the next few days, so we'll hopefully bring you a good review of the phone in the near future.