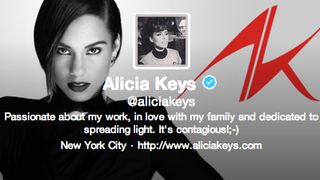 Have you ever taken on a tokenistic 'creative' position within a huge multinational corporation, only to be caught out actively using the products of the competition? Me neither.

Alicia Keys, on the other hand, has been snared in such a situation. Only a month after publicly accepting the role of Chief Creative Director for BlackBerry, Keys' Twitter account has been populated by a tweet sent from an iPhone.

Blame it on the boogie

Of course, she says it wasn't her, instead blaming that age-old digital scapegoat: the hackers.

"What the h*ll?!!!! Looks like I've been hacked... I like@Drake but that wasn't my tweet :-(" she posted shortly after the offending missive.

Yes, yes, hackers, we hear you. We may have even been inclined to believe you too, Ms Keys, had you not done exactly the same thing just a month ago, just days before the launch of BlackBerry 10.

The whole thing just seems so sad. BlackBerry, like an ageing billionaire, taking on a younger, attractive partner only to be cuckolded by the same jerk who all the pretty girls flock to. At least this might once and for all prove that celebrity endorsements like this are an embarrassing waste of money.