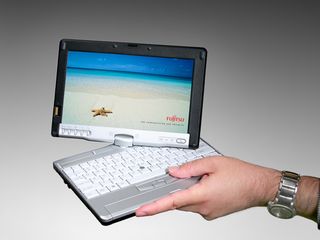 The march of spinning hard drives toward their own version of the elephant's graveyard gathered pace yesterday when Fujitsu became the latest computer supplier to offer versions of its laptop PCs with flash memory in place of conventional drives .

The solid state drives (SSDs) first appeared on Fujitsu machines in Japan two months ago and are now available in the US as options for the firm's LifeBook P1610 and B6210 models.

NAND flash memory is used to create an SSD with a capacity of either 16GB or 32GB. Although that's small compared to conventional drives, the added durability will make the compromise worthwhile for workers who need to minimize the risk of data loss in fields such as construction and healthcare.

Fujitsu hasn't listed pricing as the LifeBooks will be built to order, but we understand the 16GB SSD will add $700 (£360) to the standard notebook cost, while the larger SSD adds $1,200 (£618). Naturally, those prices will come down over the next few years once manufacturing processes and dies are re-tooled to handle SSDs in bulk.

Aside from the added durability, SSDs bring other benefits, including reduced weight, boot times, heat emissions and power consumption.