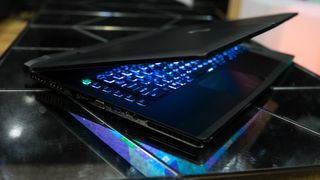 Read all about how we TechRadar tests laptops

Update: Since overhauling this page with information on a series of new and updated tests, we've now updated this space with our new, more consistent product ranking methodology for our many computing product buying guides.

TechRadar believes evaluating products based on their value proposition. As such, we review computing devices, including laptops, convertibles and desktops of all sizes against their own price and other options available on the market. Our review process is also underpinned by rigorous tests to determine the quality, performance and battery life of each machine.

We begin by examining a laptop's design and build quality to see how solid it feels to the touch and whether it fulfils the role it was designed for.

The overall build quality is important, so we go to great lengths to test the overall strength and durability of each system. We also assess the functionality of all ports, switches and latches. The quality of the screen is considered, with checks for brightness, evenness of tone, as well as any dead pixels identified.

The final part of our initial tests deals with the weight of the machine and its relative portability. Next, we assess the overall usability of the machine, including the quality of the keyboard, touchpad and overall user interface.

Before we begin testing every laptop by updating the system with the latest patches, firmware updates and drivers. No device stays frozen in time and while this means benchmarking numbers are a constantly moving – and often, rising – target, it's a part of our technological progress.

To give every machine the benefit of the doubt, we also turn on "high performance mode" before testing. This ensures the integrated graphics as well as any other components inside the laptop are operating at their maximum performance. Similarly, we switch laptops to "balanced mode" in the power options before battery tests to ensure they don't run out of juice prematurely in a setting that isn't intended for use on battery.

As every device is tested using the same suite of benchmark tests, its performance can easily be compared against rival products. Each review is accompanied by the test results for that machine, as well comparisons to its closest competitors.

Before the hands-on part of our testing has been dealt with, the laptop will spend up to 72 hours being run through a series of benchmarks to check overall performance. Each machine is set at the same high performance level for all tests save for battery life. This way, we can judge how effectively it will run at its maximum potential.

We use a number of synthetic tests to measure a laptop's components. The first, PCMark 8 battery life, tests the device's battery endurance. We then follow up with an anecdotal battery test further simulating real life usage: video playback. (Both of these are detailed in sections following this one.)

The PCMark 8 performance is conducted as well at the highest performance settings, testing its CPU and ability to multitask as well as render complex files and graphical elements. Meanwhile, 3DMark is specifically designed to test the strength of the laptop's graphics processor(s) with various 3D modeling and game physics tests. Specifically, we run the Sky Diver (aimed at gaming laptops and low-power devices), Time Spy (DirectX 12-enabled) and Fire Strike (pushing the high-end) 3DMark tests on each gaming device.

Finally, if we're reviewing a gaming laptop or desktop, we use benchmark tools found within Grand Theft Auto V and The Division for PC, to truly tax those dedicated graphics chips. Both of those tests are run at their highest and lowest settings at 1080p resolution, to give an idea of where the device's boundaries of power are at the most common pixel count.

Each of these performance tests are run at least twice to ensure an accurate result. If two results for a test vary by more than 100 points, then we run the test three times and record the average.

This software tests mobile performance and battery life, simulating popular general tasks such as video chat, web browsing and document creation while the system is unplugged.

Firstly, all laptops are set to Balanced in the power options if possible. We also tweak some advanced settings, including telling the screen and hard drives to never sleep, we set the critical battery level to 5%. Most importantly, this test is conducted with the screen brightness and system volume set to 50%, with no radios active but Wi-Fi. Any additional lighting is disabled as well.

With the laptop's battery fully charged, we disconnect the main power. PCMark 8 then simulates day-to-day use until the battery runs close to dry. Once it's through, PCMark 8 provides an estimate of the battery's total capacity in hours and minutes based on how quickly power drained during the test. Here is how we've come to interpret the scores based on past data:

In addition to using PCMark8 to create a synthetic measurement of battery life, we also test how long laptops can last through a regular day of use through a common task: video playback. In this real life test, we run a 1080p video on a continuous loop through VLC Player and measure the time until the battery is completely drained in hours and minutes.

We run the laptop from a full charge until the machine ultimately shuts down after the battery is fully exhausted.

This test is also conducted with the screen brightness and system volume set to 50%, with no radios active but Wi-Fi. Any additional lighting is disabled as well, and the power setting is set to Balanced if possible.

The way in which TechRadar ranks the products within its buying guides for computing products relies heavily on the scores each product receives. This helps keep our recommendations consistent, but there are a few more details: