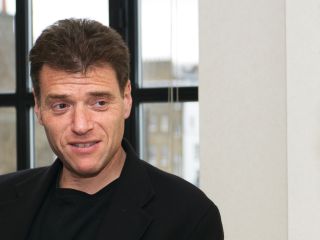 In his book The Cult of the Amateur, Andrew Keen argues that levels of inaccuracy in user-generated online knowledge bases such as Wikipedia are undermining professional credibility

Andrew Keen is peeved. Blogs, YouTube and Wikipedia might seem fun and useful to us, but in his book The Cult of the Amateur Andrew says they're killing our culture and weakening our established, high-quality media and creative institutions.

Newspapers are suffering as people go online to get their news, and the film and music industries lose revenue due to file-sharing. Instead of paying for a proper encyclopedia such as Britannica, we're all using Wikipedia, which is written by amateurs, editable by anyone and consequently is of dubious quality.

We're losing the respect that's due to professionals who are trained to provide us with accurate information in its proper context, and celebrating work produced by untrained, often anonymous riff-raff.

In turn, people are peeved with Andrew Keen. His harsh critique of the new 'democratised' media, where anyone can have a voice, has earned him much derision from Web 2.0 fans who say he's just being a terrible snob. PC Answers magazine got him to explain himself:

What would you say are the main harms that you've identified with Web 2.0?

The main harms are the devaluation of professionally produced content and the idealisation of the amateur. And I think the myth of the wisdom of the crowd. The Web has become this place where people go for free content. It's one of the reasons why people aren't reading newspapers as much, because they cost money.

Certainly, the permissiveness around intellectual property has resulted in fewer people buying records, which has been a real crisis in the recorded music business. I think the Web is a celebration of free content, and I generally think that free content is not as good as paid-for content. I like the idea of people having to pay for their content.

Wouldn't you say people's knowledge is better because of free content, because they're reading more? People look things up on Wikipedia that they wouldn't have bothered to look up otherwise, because it's so easy.

That's a good question. I'm not sure that people are reading more, but it may be a double-edged sword because if they're reading more on Wikipedia, or some of the other free services, they're actually knowing less. It's so chaotic, so disorganised, it's lacking any kind of context, much of the information out there is unreliable, biased, poorly written, corrupting... so if they're reading more, that's bad, because they're being more misled.

I'm not sure that I would agree that people are reading more, either. They're browsing more, they're avoiding professional media more and embracing the Internet. Whether they're really reading and digesting that information is another issue.

You're very critical of Wikipedia in your book.

I think Wikipedia is a really interesting phenomenon. Clearly it does satisfy a certain thirst for information. My problem with Wikipedia, though, is that often it's unreliable, it lacks any kind of context and it caters to an increasingly trivialising and inane kind of culture.

But you can't blame the technology for that. The internet and the Web 2.0 world is really just a mirror, when we look at it we're looking at ourselves. What we see isn't always very encouraging. There are clearly values to Wikipedia: I use it myself from time to time, although I'd never really rely on it. I would much rather pay for the information on Britannica.

There are two kinds of content on Wikipedia. There's the kind of content that gets into Britannica: entries about Martin Luther King, theories of relativity, those kinds of things. I would much rather people looked on Britannica for that because it's written by experts and it's reliable.