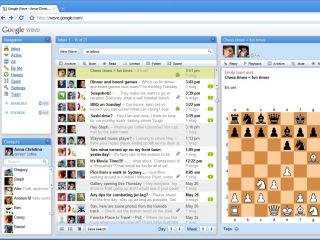 Google Wave will almost certainly have an application marketplace, where people will be able to buy third party plug ins for the forthcoming collaboration and communication tool.

Speaking to TechRadar about the Preview trial of Wave, Google Senior Staff Engineer and Wave co-developer Lars Rasmussen admitted that he would be surprised if an application store model was not followed.

"So we haven't 100 per cent locked this in, but all the developers are asking [about paid-for apps]," said Rasmussen.

"…developers have asked us a lot for a market place where we'll help them sell their extensions to our users including a revenue share so we'll also make some money from it.

"I'll be very surprised if we don't go down that route."

Invites for the 'Preview' build of Google are hard to come by, with the Wave team exceeding their expectations in terms of the number of people who have been asked to participate, but well behind the number of requests.

Rasmussen sad that 'several hundred thousand' people were on the Wave preview, but that interest was still high.

"So many people really want in," said Rasmussen. "There are folks speculating it's a marketing ploy but it's absolutely not.

"It's nice to have more requests than we can handle, but we would really like to give it to anyone.

"If you are at the bottom of the list then it will be several months yet – there are several hundred thousand participants for more than 2 million requests but you have to bear in mind that every individual can nominate 8 people for invites, so it takes us a while."

The reason given that Wave has not been rolled out to everyone is to do with the scalability of the product – with Google still working out how to deal with the sheer load of information that it has to host in each wave.

"I think as soon as scalability is in place we'll open it up, as long as we carefully manage people's expectations," added Rasmussen.

"I don't think we should be the one denying people access if they want it.

"But the reason we aren't letting more people in is almost exclusively scalability – currently we cant actually handle [opening it up to public]."