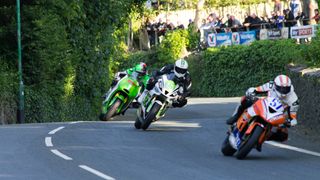 The historic Isle of Man TT - in to its 100th edition, no less - is in full flow. With a following of dedicated fans, general petrol-heads and the casually interested, there is  no motorsport event in the world quite like this one. If you're among the number who want to watch, you can follow our instructions to get yourself an Isle of Man TT live stream - no matter where in the world you happen to be.

Last year saw the 135mph barrier broken in the final lap of the final race by Dean Harrison and Peter Hickman. What a IOMTT battle that was. With greats returning this year, including John McGuinness, Michael Dunlop and Ian Hutchinson, the racing should be eye-melting with its speed and daring.

The where part of the Isle of Man TT motorbike race is pretty clear from the name, with the riders pelting around the UK island at madcap speeds.

So it's the when that you need to take note of. The racing starts from Saturday, 1 June and goes through to Friday, June 7.

Since 1907 motorcycle fans have flocked to the tiny Isle of Man to race and watch as bikes hurtle along the public roads at mind bending speeds. This works as a time trial meaning each bike heads out alone to try and complete the course fastest. This means minimal chance of crashes, but inevitably each year is met with lots of on- and off-bike action.

Let's be honest, the Isle of Man isn't the easiest place to get to and staying there during the TT isn't cheap, so for most, watching the action via broadcast is the best bet. We've pulled together everything you need to know so you can enjoy the action from wherever you are. The coverage breaks down into four days of racing once the real event kicks off  – here's how you can see them. But be warned...getting an actual Isle of Man TT live stream is a bit of a misnomer again this year, with only highlights being available of the week.

How to watch the Isle of Man TT in the UK

The Isle of Man TT action will be aired in the UK via your TV aerial through ITV4 - which is edited, not live - at 9pm BST from June 1 to June 8.

That gives you options since ITV4 is available on various TV mediums like Freeview or a set-top box but also online. ITV allows you to watch ITV4 online via its own site meaning any device that has a browser should be able to play it. That also means you can enjoy the content via the ITV Hub app on your mobile device or even smart TV.

You can't watch ITV4 from abroad though, if you're on holiday for example. That requires a little lateral thinking...

ITV is one of the vast majority of broadcasters that geo-block their transmissions so that they can't be watched online from abroad.

That means if you want to live stream Isle of Man TT 2019 highlights as described above, you'll need to use a VPN. It's surprisingly easy to do...just follow these three steps:

1. Download and install a VPN
We've tested all of the major VPN services and we rate ExpressVPN as the absolute best. It's compatible with all of your devices, supports most streaming services and ranks amongst the fastest. You can even install it on devices like an Amazon Fire TV Stick, Apple TV, Xbox and PlayStation. So for a one-stop shop, you can't go wrong with Express - but there are more fantastic VPN options out there as well:

- ExpressVPN:  the best all-round VPN for streaming, comes with 30-day money back guarantee and, if you sign up for an annual plan, 3 months extra absolutely FREE
- NordVPN: SmartPlay tech makes NordVPN a great, affordable choice for streaming
- IPVanish supports up to 10 devices, so great on the go

2. Connect to the appropriate server location
Simply open the VPN app, hit 'choose location' and select the appropriate location - it's super easy to do. So choose a UK server if you want to stream that ITV IOMTT coverage.

3. Go to TVPlayer.com
This is a great service and, crucially, is a free and legal way to stream live all the racing action from the Isle of Man event. TVPlayer.com gives you easy access to tonnes more channels.