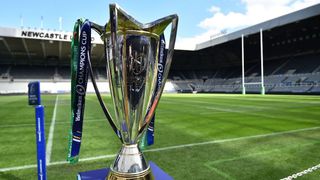 Leinster vs Saracens - where and when

Kick-off at at 5pm BST. So if you're watching from abroad, that's midday ET, 9am PT, 2am AEST.

This is the tournament that puts the top European rugby clubs against each other for glory. This year Ireland's Leinster and England's Saracens have qualified for the final after another gruelling campaign.

Leinster have won the cup for four years now, a record only it and Toulouse have managed. So if Leinster can best Saracens in this year's final that will put the team as the sole record holder that has managed five victories.

Saracens won back-to-back trophies in 2016 and 2017 before losing to the Irish giants last year. This will be a chance to reclaim the silverware. So this game should be a great one with both Saracens and Leinster performing powerfully at the moment and eager to win this year.

There's fantastic news for rugby fans in the UK...you can watch the European Rugby Champions Cup final from the comfort of your home this year with free-to-air coverage from Channel 4 (also being shown on BT Sport 2 if you prefer the paid-for channel's coverage). That means you can also enjoy it wherever you are using their apps - All 4 and BT Sport - for smartphone, tablet and laptop viewing.

Don't worry if you're away during the game and discover that the streaming is geo-blocked you can still watch using a handy VPN. It's really straightforward to do so in three very easy steps:

1. Download and install a VPN
We've tested all of the major VPN services and we rate ExpressVPN as the absolute best. It's compatible with all of your devices, supports most streaming services and ranks amongst the fastest. You can even install it on devices like an Amazon Fire TV Stick, Apple TV, Xbox and PlayStation. So for a one-stop shop, you can't go too wrong with Express (and even if you do, its 24/7 support is excellent, too) - but there are more fantastic VPN options out there as well:
1. ExpressVPN:  the best all-round VPN for streaming, comes with 30-day trial and 3 months free if you sign up for a year
2. NordVPN: SmartPlay tech makes NordVPN a great choice for streaming, and the pricing is great too
3. IPVanish supports up to 10 devices, so great on the go

2. Connect to the appropriate server location
Simply open the VPN app, hit 'choose location' and select the appropriate location - it's super easy to do. Choose an English locale to stream that Channel 4 or BT Sport coverage.

3. Go to TVPlayer.com
Click on this link any time from 4.30pm BST and you'll find the live stream coverage of the European Champion Cup final.

TVPlayer.com is a fast, reliable, robust, free and legal way to access all of the UK's freeview channels in one place.

Using the best VPN is obviously only OK if you don't breach the Ts&Cs of your country's broadcaster. But it's worth noting that it isn't just open to UK rugby fans. If you're from somewhere else, happen to be abroad this weekend and still want to catch your domestic coverage of the big Leinster vs Saracens final, then the same process applies to you.

In the US, Canada or Down Under and want to catch the game? We have some key information for you, too.

How to watch the European Rugby Champions Cup final: US stream

The European Rugby Champions Cup final will be streamed online via NBC Sports Gold which you can watch online at the NBC Sports Gold page here. You will need to have access to that via either NBC, NBCSN or NBC Sports Gold. Either way, you'll need your cable details handy.

Not got cable? There are plenty of over-the-top TV streaming services you can use instead - loads of which come with a completely free trial. A couple of great examples are Sling or Fubo.

Out of the US today? Then grab a VPN, follow the instructions above and you'll be watching the rugby in no time.

The European Rugby Champions Cup final will be streamed online via the growing sports streaming site DAZN. DAZN has become the go-to service for loads of events in Canada including boxing, soccer and all this year's Six Nations rugby games.

Signing up to DAZN costs $20 per month or $150 for an entire year. But the great thing is that you can also give it a whirl with a 30-day money back guarantee - perfect if you fancy Leinster vs Saracens but don't want to pay for the privilege.

For Australia the European Rugby Champions Cup final will be streamed online via Rugby Pass which you can watch online at the Rugby Pass page here. Although getting a Leinster vs Saracens live stream involves either a really long night or super early morning.