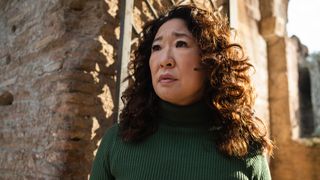 Calling all Killing Eve fans out there, there is good news all around - season 3 of this hit TV series has been confirmed to be released on Sunday, April 26!

So whether you need to watch a few episodes ahead of the release, or you're watching for the first time (or re-watching) keep reading to find out how to watch Killing Eve online.

Both seasons are available to stream - no matter where in the world you are. You can see a full list of viewing options down below.

A truly binge-worthy show, it's easy to see how it's picked up so many awards and why it has a cult following. On a level of TV brilliance you can only get from the likes of Game of Thrones or Chernobyl, Killing Eve is a must watch.

Whether you still have a few episodes to catch up ahead of season 3 or you're re-watching all of the spy-action and drama, keep reading to find out how to watch Killing Eve online from anywhere.

Watch Killing Eve online from outside your country:

If you find yourself out of the country, on holiday or temporarily abroad when the show is on, don't panic just yet, there is still a chance to watch Killing Eve online as it happens. Using a little handy trick, you can get around geo-blocks and digital borders using a VPN.

This will allow you to gain access to all the Killing Eve live content as it happens without even having to be in the states by changing your IP to an American one.

Which VPN is best for you? Our personal favourite is ExpressVPN. And how do you use that to watch Killing Eve online? Read on to find out all you need to know.

Once you have it, go ahead and open the VPN app, hit 'choose location' to virtually transport yourself home - it's super easy to do. Once you've changed to an appropriate region, you just need to go to your home broadcaster and then you're ready to watch all the Killing Eve action.

How to watch Killing Eve online in the UK

Simply tune into BBC iPlayer as both seasons of Killing Eve are available on the streaming platform.

Or if you want to really delve into the world of Eve and Villanelle, watch both seasons from start to finish on BBC iPlayer.

How to watch Killing Eve online in the US:

If you're planning on watching Killing Eve in the US it's easy! You simply need to have access to cable and a connection to a BBC America broadcast.

You can also watch the whole show online with the BBC America app or by going straight to BBC America as long as you have a log-in and a cable subscription.

And remember, if you've mismatched a holiday or just so happen to be out of the US when you want to watch it - you can always use a VPN.

How to watch Killing Eve online in Australia

For fans based Down-Under it's quite simple, just tune into ABC's iview , as the streaming platform now has both seasons of Killing Eve.