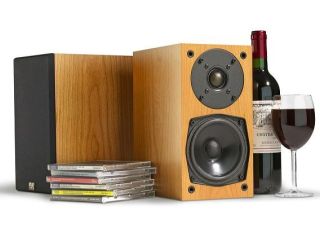 Most hi-fi systems on sale worldwide are so heavily marked up that the majority of customers are being scandalously ripped off. That's what AVI hi-fi chief Ashley James said in an interview conducted with Tech.co.uk last Friday at the Bristol Sound & Vision Show .

He also said that companies are selling inferior products for extortionate prices, and that the magazine industry is supplying unhelpful and inaccurate reviews which allow the hi-fi manufacturers to get away with it.

"I'm not going to mention the name of a company which sells an AV processor for several thousand quid. You boys with computers will know perfectly well that if you want Dolby 5.1 you can get a PC card for £7.50 with the same chipset in it," he said.

"We had a customer who came to see us last week, [who paid] £4,000 for a power supply from this company, but it hummed like buggery and it drove him up the wall so he took the lid off of it. And what was in it? One transformer, two capacitors and a regulator! Forty quid's worth of bits in a box that cost £4,000."

James said that this practice is rife in the industry, and that the rip-off hardware includes many types of loudspeaker as well as CD players, amplifiers, tuners and power supplies.

He said: "If you go to [major player in the hi-fi industry; name removed] to buy a 50 watts per channel amplifier - bearing in mind that you would need 500 watt peaks for most modern recordings at normal listening levels - you would be asked to pay around £750. A CD player could be £850. If you want a radio then that's more money, and if you wanted a pair of speakers that could be an additional £850."

"So for £3,000 you've got a pretty mediocre system and I think it would be difficult to argue that they were in anyway superior to a [much cheaper] system you might buy from Richer Sounds - Cambridge Audio or something like that.

"That's the truth, and I think the fact is that there are lots of companies who do the same sort of thing - and behind the scenes most people realise that. And I think that most of the public at large feel the same way."

James said that the failure of the major hi-fi magazines to point out these massive price discrepancies is leading to buyers being severely ripped off.

"The magazines have not been very discerning. And as a result they haven't been able to tell people if things are very good value for money."

"The fact of the matter is that loudspeakers can be sold in sufficiently large quantities to certain shops, for the discounts to be up to 80 per cent. Now I've never seen a review in a magazine which says [that the retail price] isn't very good value for money. And yet I bet the manufacturers are still making a profit out of the £1,000 pair of speakers they sold discounted for £200.

"So we've got a load of crap loudspeakers out there, the reviews of which help nobody. We've got no attempt being made as to whether something is value for money or not. We've got an £850 50 watt per channel amplifier, and another one from Cambridge Audio for £200 which was better specified."

James said later in the interview that some of the top-end hi-fi equipment that is sold for many thousands of pounds is worth nowhere near that amount, and isn't great quality in the first place.

"It's no good and it's ridiculously priced. They're very nice people in a room down the hall [at the Bristol hi-fi show] but their amplifier for £4,500 [he shakes his head in disdain]... I don't know how much the rest of it is, but it's utterly ridiculous."

According to James, hi-fi magazines in the UK and US, with one or two exceptions, have had every opportunity to change the tide; intelligent readers have written in and pointed out the "obscene" quality-to-price ratios.

But instead of taking heed, the magazines have apparently only responded by inviting replies from the "lunatic fringe" manufacturers in order to stir up controversy. And that's as far as it goes, which means the hi-fi companies can continue charging whatever they like, unchecked.

"I just think that [listening to music and buying hi-fi gear] is an intelligent pursuit. And I think at the moment large numbers of people are being denied hi-fi by shops that are reluctant to accept that [these intelligent people] exist, and by magazines that haven't even considered that they might exist," James said.

"You've got some hi-fi systems with £80 worth of components inside being sold for £2,750. And the magazine reviewers are just not good enough to tell the difference."

Ashley James got his first job in the audio industry in the 1950s. He later became an instrument engineer, a watch and clock maker and a restorer of automobile engines. He eventually receiving formal training and becoming a manager before settling at AVI.