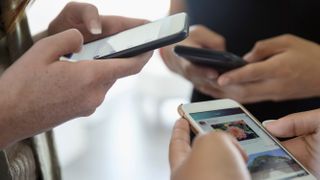 More specifically, what if the reason social media seems to cause so many problems is that our brains just haven’t evolved to cope? That’s the contention of evolutionary anthropologist Dr Anna Machin, who believes that the convenience social media has brought to our our lives fundamentally misunderstands why humans have become the dominant species on Earth.

“You can contact 200 people at once. You don’t have to see them – you can tell them what you’re doing, they are in your life,” she said on stage at New Scientist Live, highlighting the appeal of Facebook. “The problem is relationships aren't supposed to be efficient. If we try and have efficient social relationships, the quality goes down, and the costs - particularly in relation to your physical and mental health - go up.”

Later, in an interview with TechRadar, she elaborated further. “We're whipping ahead with all this innovation, doing these amazing things, but the biological evolution hasn't evolved and isn't adapted to having a social relationships online. So there's this massive mismatch.”

To understand the scale of this mismatch, you have to back up a little bit and look at brain chemistry, and specifically what happens in our heads during a social interaction. Oxytocin lowers inhibitions and gives you the confidence to form new relationships by “quieting the fear centre of the brain”.

Dopamine is released in conjunction with this, giving you a rush of pleasure – rewarding you for making these new relationships. Beta endorphins are also released, which feel good, but as a natural opiate can also lead to withdrawal symptoms when you don’t get enough, encouraging you to stick together.

You may see social media as a subsidy towards or even a replacement to socialising, but if it is, nobody has told your brain. “If you get loads of Instagram likes, you get a nice dopamine hit, but with things like beta endorphin and oxytocin you don't get anything at all,” Machin explains. There’s nothing.”

“The only way you might have tiny hit is if you decided to use Skype to interact and that's because you actually see body movements and hear tone of voice. You don't get anything from text on a screen.”

But there’s more than just neurochemistry at work here: there’s the Dunbar number. Coincidentally coined by Machin’s colleague at Oxford, Dr Robin Dunbar, the figure has been studied in numerous societies around the world and tries to put a figure on the maximum number of social connections a human can cope with. That number? 150. The limit is based on both time and our very cognition, and if it sounds high that’s because it works in circles of familiarity – in terms of close friends you could rely on in a crisis, the number is in single figures.

Theoretically though, if we used social media as a kind of a data store, couldn’t we evolve to increase this number? “Yeees,” Machin replied cautiously, “but I think the issue is that you will only see evolution towards that if the advantages of social media outweighs the disadvantages. These things have to be a massive advantage in our environment for that to happen and, at the moment, I don't think we're using it in a way where it is.” Even then, you’re looking at tens of thousands of years. Given Facebook is 14 and already creaking, what odds would you give it of seeing in its 1,000th birthday?

“It’s like oxygen,” Machin reasons. “You wouldn't say to somebody 'Oh, I'll drain the oxygen in this room by 50%, don't worry you'll be fine' – because you wouldn't, you'd die. And that's basically what's happened with social media. We removed how you're supposed to do social interaction, which is in person giving you all the wonderful neurochemistry and with all the benefits of your massive social network, and we're suffering.” Social interaction is as important to us as food and water in Machin’s eyes, and despite the appearance of a massive digital feast, we’re slowly allowing ourselves to starve.

This may sound like a technophobic rant, but that isn’t who Machin is at all. “It's a nuanced conversation,” she said. “It's not a case of 'social media is bad, we all need to stop using it', because it certainly has its benefits.”

Making the very technology is in itself is an enormous achievement for us as a species. “Our abilities to innovate are what have seen us spread out around the globe. To be the only hominid species that’s able to adapt our environment to us, rather than the other way around,” she said. Social media in particular, she adds, has been incredibly useful for the sharing of ideas, mental health (in some respects) and, by connecting us with like-minded people no matter the geography, it has made us a truly 'global village'.

But all of our great societal leaps have come off the back of sociability and knack for cooperation, and while social media should supercharge that, the formula our tech giants have landed on has unintended consequences. “Imagine a toddler in a sweet shop with 1,000 different sweets,” Machin said. “We pick two and say ‘you can have one of these: pick.’ There may be a bit of faffing, but ultimately they’ll pick one and we’ll all be happy.

“But If you go into the same sweet shop and say ‘you can literally have anything you want’, the toddler has a tantrum. That toddler is your brain, because it has not got the capacity to make the sort of choices – particularly in relation to dating apps - that we see in social media.”

Dr Michael Sinclair from the City Psychology Group agrees with this analysis. “Our brains are just hungry for it, and we'll take in more and more information, never really considering how full we are,” he tells TechRadar. But more than this, humans’ showy natures mean that even light usage can give our sense of self-worth a kicking.

“We're sizing ourselves up in comparison. We're constantly recognising our shortcomings, failings and how our lives aren't as good as others’, when presented with these idealized images of peoples' lives,” he said.

If you’re thinking this sounds especially bad for teens, you’re absolutely correct. The teenage brain, Machin said, goes through a fundamental period of wiring and rewiring, and it craves nurturing interactive relationships to see it safely through to the other side.

By taking on Twitter, Snapchat and Instagram, teenagers are “submitting their brains to this slightly alien form of social interaction when it’s at its most vulnerable.” The finely balanced brain chemistry, suddenly awash with testosterone, estrogen and progesterone, isn’t an ideal place to sub out 200,000 years of tried and tested social best practice with a medium just over a decade old. “The brain chemistry is very, very finely balanced,” Machin said, “You only need to prod it slightly out of line for there to be negative consequences.”

Of course social media sites typically have an age limit of 13 to access – which is routinely ignored by children and their parents alike. But even if the rules were enforceable, it’s probably is the worst possible age from a child-development perspective.

“If you are really restricting it based on when the brain stops changing, you have to be looking at early 20s,” Machin said. “Which is obviously not going to be attractive if you're a social media executive.”

But that raises an interesting question. Could a social media platform thrive if it doesn’t simultaneously overwhelm the brain and starve it of nutritious chemical reactions? “I'm not being very creative, but probably not,” said Sinclair. “I mean, it is what it is, and rather than changing the technology - which is amazing and fantastic and gives us huge benefits in terms of quality of life - it's more about developing and updating our minds to enjoy them. It's not necessarily about changing, stopping or turning off social media, but allowing it to evolve and watching our own behaviour in response to that.”

Machin agrees that it’s down to personal willpower. “That's what I think we’ve lost,” she said. “We’ve abdicated our responsibility and just let the companies go with it: ‘do whatever you want and I’ll just use it.’

“You know that you’ve drunk too much, you know you should stop doing some things, you know you can’t eat an entire chocolate cake. It’s willpower, and it’s the same thing with social media.”

But that’s down to us, and willpower hasn’t always been a strong point for humans, despite our many achievements. The fact that the likes of Apple and Google are now including apps to monitor screen time may be a good start, of course, but perhaps the more pressing issue is what all this says about our tendency to run towards new and exciting – aided and abetted by that dopamine rush of discovery. For Machin, our failure to see the problems with social media coming makes the age of artificial intelligence a potentially frightening one – and not for the usual doomsday reasons.

“I want to sound a warning bell before we get too [engrossed] in AI,” Machin said, highlighting potential plans to introduce care robots for the elderly. “To go into someone’s home to care for them, you have to have a wet brain. You have to have the brain that truly empathises, truly understands and can share experiences. Because that’s part of the way we empathise and understand as a fellow human how this person is feeling, and I find it very hard to believe that you genuinely could make a robot capable of that.

“As a society, we have to say, 'Okay, how do we want to use AI? Where do we want to integrate it into our lives, bearing in mind the costs that have come from social media, which is a much smaller invasion into our social lives than something like AI could be?'” Ironically, our wet brains should be the buffer to prevent this from happening – after all, what are we if we can’t learn from our past experiences?

That’s tomorrow’s fight, of course, but perhaps the best take home from this article is the advice Machin plans to give to her daughters when they inevitably express an interest in social media. “I’ll explain to them that this is just a tool,” she said. “And if you ever find yourself stressed or depressed by it, then it's not your tool anymore.”