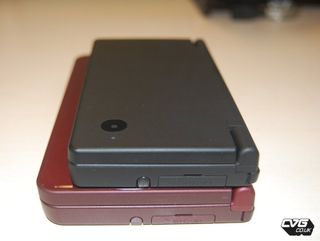 CVG.com has published its Nintendo DSi XL review and confessed that despite their early reservations they like the oversized handheld.

There was much scorn at the news that Nintendo's next generation DS would be significantly larger, but it appears that our fellow Future Publishing site has been grabbed by the XL bug.

"We flipped back the DSi XL's strikingly thick upper body to reveal two giant, bright screens that slapped our jaded views in the face like a wet fish," opens CVG's review.

The blockier graphics created by a larger screen with the same resolution is obviously an issue and the size gives the DSi XL some obvious drawbacks.

"Whether or not you should buy a DSi XL really depends on how you use your DS - if you tend not to carry it out with you, and only ever tend to use it at home, then the DSi XL is the better choice - if only for the stunning screen size," adds CVG.

"But for its sheer size and increased weight, you wouldn't want this in your pocket or handbag. For gaming on the go, the standard DSi is far more convenient and apart from the smaller screens, does the job just as well in all other areas."

Sage words, and you can read more of them over on CVG.