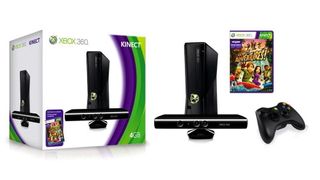 In an unceremonious blog post by Larry "Major Nelson" Hryb this week, Microsoft announced its plan to expand the reach of its $99 Xbox 360 plus Kinect bundle program to GameStop and Best Buy stores. Here's the scoop on this console deal.

The program started in May, launching only in 16 US Microsoft stores as a pilot program. Consumers responded favorably, adopting the pay-per-month plan despite the limited reach of the retail locations.

The program offers a 4GB Xbox 360 Kinect Bundle (which includes an Xbox 360 with a 4GB hard drive, a Kinect motion camera, one Xbox 360 controller, and a two-year subscription to Xbox LIVE as a Gold member) for $99 up front. The rub, as they say, is in the subscription.

By agreeing to the terms of the deal, consumers pay the initial $99 and an additional $15 a month for two years.

The Xbox 360 in this bundle is the newer iteration of the 360 (capacitive eject button, improved heat sink and memory, Kinect-ready) and has 4GB of hard drive space, good for a small library of downloadable titles.

The black console comes with a matching battery-powered wireless controller.

The Kinect is a multi-featured camera, enabling motion-control play and menu navigation as well as voice-activated commands.

Kinect has allowed for the evolution of games like Dance Central, and has enhanced gaming experiences like The Elder Scrolls V: Skyrim with voice-commands.

The price to play

The purchase requires a contract which locks buyers into the two-year payment plan. Cancellation fees start at $250 and diminish by $12 a month starting the fourth month of the contract.

Consumers can pick up the bundle at their local Best Buy for $99 today, agreeing to pay the $15 each month for two years. In total, after the two years of paying for the subscription, the cost is $459.

Best Buy offers the bundle (without an Xbox LIVE Gold subscription and with Kinect Adventures) for $299, and Microsoft offers two-years of Xbox LIVE Gold for $120 (or $5 a month).

Essentially, the consumer pays $40 interest to defer the payment, in the same way that a credit card user pays interest on unsettled amounts. The APR, it turns out, is pretty good, at 4.75%.

For reference, Best Buy also offers a six-month financing plan with the purchase of any Xbox 360 Kinect Bundle, with an APR of 0% if paid within the six months.

Consumers who are just looking to get the hardware can cancel the subscription to Xbox LIVE Gold, but that comes at a price as well.

Cancellation fees start at $250 during the first three months, then go down in $12 each month thereafter for the two year term.

Assuming a buyer does cancel the subscription right away, that's $99 for the hardware, $15 for the first month (mandatory) of Xbox LIVE Gold, and a $250 cancellation fee.

Now she has an Xbox 360, a Kinect, a controller, no subscription, and zero games for the price of $364, or $65 more than the bundle at current retail pricing.

Certainly Microsoft is working hard to make the online component of it's entertainment suite worthwhile. With Microsoft's E3 announcements of sports partnerships, Xbox Music, and SmartGlass, an offline Xbox 360 now feels like an archaic game system.

Getting and staying connected at $459 dollars will net consumers full access to Microsoft's wide range of connectivity, entertainment, and gaming applications.

For consumers looking to defer payment, the $99 Xbox 360 Kinect Bundle is promising. The interest rate isn't terrible, and the payments are spread out over a two-year period.

$15 a month could buy two Netflix subscriptions, or defray the cable cost of HBO-GO, but the Xbox LIVE Gold membership does open the doors for competitive online multiplayer, a nearly ubiquitous feature in modern AAA games.

Microsoft slid this announcement quietly into a week already packed with gaming news, and made no mention of the deal at its press conference just one day prior.

With Major Nelson announcing the expansion of the bargain bundle offering, Microsoft was able to focus more heavily on the features and the games that it's packing onto the Xbox 360.

The pay-as-you-go model isn't familiar in the gaming industry, but Microsoft looks to be slowly changing that.

Continued success with this program will likely lead to further expansion, even as rumors of a new console generation fly around the 'net.

The $99 Xbox 360 Kinect Bundle will start showing up at Best Buy and GameStop locations sometime this month.