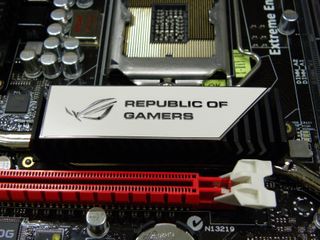 Asus sent us this teaser photo

The ROG board will be shown off starting later this week, with attendees getting the chance to get a glimpse of the cutting-edge flagship Asus mobo.

The ROG Maximus III Extreme features four-way CrossFire support and is based on the Intel P55 chipset.

But much of the attention will be on the fact that you can overclock the board through your mobile phone's Bluetooth with Asus' ROG Connect.

"Perhaps the most innovative addition to ROG Connect, however, is RC Bluetooth, a feature which allows users to review the status of their systems' hardware and tweak parameters wirelessly from a Bluetooth-enabled PDA phone," explains Asus.

"All it requires is the press of a button located on the rear I/O panel to toggle between overclocking and standard modes."

It's certainly an intriguing option, although we're just waiting for the news of someone finding their computer overclocked to melting point by a rival during a bout of gaming.