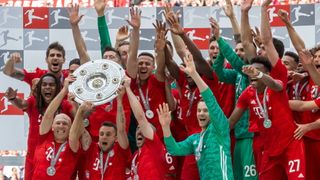 Having had Borussia Dortmund run them close to the title last year to make it seven Bundesliga titles in a row, could this be the year Bayern Munich see their league winning run end?

The first half of the 19/20 campaign has seen RB Leipzig lead the way as Herbstmeister (autumn champions). It marked the first time since Bayern or Borussia Dortmund have finished top of the table at the halfway stage since 2009.

It's not just Julian Nagelsmann Leipzig that threaten Bayern's winning streak, with Borussia Mönchengladbach pushing Bayern down to third at the halfway point.

Thankfully for Bayern, Polish striker Robert Lewandowski has been in arguably the best goal scoring form of his already incredible career, and will be hoping his lethal instincts may yet be the difference in what looks set to be a thrilling title run-in.

With last year's runners-up Dortmund and Schalke remaining in touching distance, it looks like being one of the most exciting seasons in recent Bundesliga history.

You can watch all of the remaining action of the season in your region by following our guide below to getting a Bundesliga live stream - no matter where you are in the world.

If you're abroad and can't bear to miss out on catching the coverage from your home country of Bundesliga, you'll inevitably find it geo-blocked when you try to stream online. But don't sweat. With the option of a VPN, you can tune into those fixtures no matter where you are in the world without resorting to some dodgy feed on Reddit. And best of all, it's really easy to do:

Scroll down to find out your football viewing options in some of the major Bundesliga watching countries around the world. But even if you're away from your home coverage, you can always use a VPN to dial back into your country that does have a stream. A VPN is perfect for this as it allows you to change your IP address so you appear to be in a completely different location.

We've tested hundreds of VPNs and can recommend Express VPN (which comes with a 30 day money back guarantee) the very best one out there. You can watch on many devices at once including Smart TVs, Fire TV Stick, PC, Mac, iPhone, Android phone, iPads, tablets etc. Check out Express VPN and get 3 months free on an annual plan

As well as keeping you up to speed with the Bundesliga, VPNs have also become popular as an extra layer of security online thanks to their encrypted tunnels. Not to mention watching foreign Netflix catalogues and getting access to geo-blocked websites and apps.

How to stream Bundesliga live in the UK

Footy fans in the UK and Ireland looking for a regular dose of live action from the German top flight are being being served by BT Sport who have the rights to show key matches as they happen throughout the season.

How to watch the Bundesliga: US live stream

Stateside footy fans are taking a particularly keen interest in the Bundesliga this season, with several USMNT players now plying their trade in the German top flight.

Fox Sport is the US TV home to the Bundesliga with as many as six live games being shown across a combination of FOX Sports 1, FOX Sports 2, FOX Deportes, FOX Soccer Plus and Univision Deportes each match week. Assuming you have cable, you'll be able to watch on Fox either at home, online or on the network's Fox Go app for tablets and smartphones.

How to live stream Bundesliga soccer in Canada

In Canada, subscription TV channel Sportsnet have the rights to show the Bundesliga, but if you don't have that, you can sign up to Sportsnet NOW for a live HD stream on your computer or mobile device (WiFi signal permitting).

How to live stream Bundesliga action in Australia

How to watch a Bundesliga live stream in New Zealand