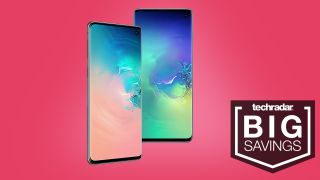 This isn't the best price we've ever seen for the Samsung Galaxy S10 Plus, but it does bundle in a free smartwatch - and one of our favorites at that.

If you buy an unlocked Samsung Galaxy S10 Plus - the best phone in the world right now, according to TechRadar - directly from the manufacturer for $799.99, you'll get a free Samsung Galaxy Watch Active 2.

That's a great smartwatch that only came out a few months ago and sports a fitness-friendly design as well as GPS and all the other benefits Tizen software offers your wrist.

The Galaxy S10 Plus is already $200 off its RRP in this deal, and that watch also costs $279.99 when you buy it full price. We have seen the Galaxy S10 Plus drop as low as $699.99 in the past few days, but that deal seems to have finished now so this is the next best thing.

You'll also find a similar deal for the Samsung Galaxy S10, though this is for the 512GB version of the handset that costs $949.99. Don'y worry, you'll still get a free smartwatch with it.

Samsung Galaxy S10 Plus 512GB: $949.99 at Amazon
If you want the medium-sized Samsung Galaxy S10 Plus, with plenty of storage but not the max amount, this is the deal for you. The phone is now less than $1,000, giving you a great reason to buy it, especially if you need a new smartphone powerhouse.
View Deal

Samsung Galaxy S10 Plus 1TB: $1,299.99 at Amazon
This deal nets you a Samsung Galaxy S10 Plus with a massive 1TB storage, more than most people will ever need. Sure, the $300 off here doesn't exactly make the phone affordable still, but this is the best phone of 2019 with the most storage space, so if you need a top-quality handset this is it.
View Deal

Not in the US? Here are the best Samsung Galaxy S10 Plus prices in your region.