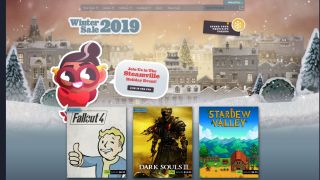 It's that time of year again: the snow is falling, the air hurts your face, everyone is getting together with their family for the Holidays and, of course, the Steam Winter Sale is here.

However for the last few years the Steam Winter Sale has been including more complicated extras, and this year is definitely no different. There is, of course, the Steam Awards, where the Steam community can vote on their favorite games from a number of different categories like "Game of the Year," "Outstanding Story-Rich Game," or even "Best Game You Suck At."

This isn't anything new, of course, as the Steam awards have been going on since 2016. The new addition this year is the Steamville Holiday Market. This little meta event will let you acquire tokens, which you can then use to buy chat stickers, chat room effects and other holiday-themed cosmetic effects for Steam. Our recommendation, though, is to bank them up, then spend 5,000 of them to get $5 off a game – we're all for cheap games getting cheaper.

As for how long the sale will last, it looks like you have time to really think about what games you'll use to engorge your Steam library. While there isn't a big banner on the store telling you when it will end, all the sales conveniently end on January 2, so that means you have a good two weeks to pick up a bunch of games for less.

What's worth buying, though?

Steam has probably the largest catalog of games out of any distribution service on the internet, so finding the best deals is not exactly a walk in the park. Not only are there a ton of games, but there's a lot of bad games on the platform that are really just a waste of your time.

Luckily, here at TechRadar, we tend to spend an inordinate amount of time looking through storefronts to find good deals to pass on to our readers, and Steam's confusing mess of a store is no different. So, we found the best Steam Winter Sale deals, so you can spend less time shopping and more time gaming.

Bloodstained: Ritual of the Night: $27.99 at Steam
Miss the old days of Castlevania? This side-scrolling action game brings back that classic gameplay, thanks to the return of Koji Igarashi. If you've been craving a return to where "MetroidVania" games got half of their name, don't miss this one. View Deal

Kingdom Come: Deliverance: $14.99 at Steam
This game isn't for the light of heart: this hardcore RPG puts you in the shoes of an average medieval peasant. After your parents are killed, you have to shape yourself into a knight in order to avenge their deaths. And, it won't be easy. View Deal

The entire Final Fantasy library: 50% off at Steam
Close your eyes and think of an RPG. For a certain subset of people, the first thing that came to mind was Final Fantasy. This long-running series was instrumental in forming the genre, and every major entry is now 50% off on Steam. It's time to witness history.View Deal

Sekiro: Shadows Die Twice: $38.99 at Steam
The latest From Software title won Game of the Year at the Game Awards this year and for good reason. Even if it's brutally difficult and many won't be able to get through it, it's a masterwork of game design. And, it can be yours for just $38.99 during the Steam Winter Sale.View Deal

Dark Souls III: $14.99 at Steam
As good as Sekiro: Shadows Die Twice is, it's not everyone's cup of tea. If it's a bit too fast paced for you, Dark Souls III is also on sale. This game is slower, more methodical and, if you're asking us, more replayable. And, at just $14 on Steam, there's no reason not to buy it.View Deal

Life is Strange 2 Complete Season: $19.67 on Steam
If you ask us, Life is Strange is by far one of the most overlooked game franchises on the market today. With deep, mature storytelling about characters you can't help but care deeply about, LIfe is Strange 2 is an adventure game you don't want to miss – especially at $19.View Deal

Yakuza 0: $6.79
Yakuza 0 is one of the most bizarre and amazing open world fighting/rpg/sports game on the market today and is an absolute gem. You'll be able to get dozens upon dozens of hours of pure joy here, and when you can get it for just $6, you need to buy it. Now.View Deal

Frostpunk: $11.99 at Steam
When it comes to PC gaming, City Building Sims are among the longest-standing games out there, dating all the way back to 1989's SimCity, and Frostpunk might just be the best one yet. The stakes are higher, the gameplay is harder and now it's only $11 on Steam.View Deal

Disco Elysium: $31.99 on Steam
Disco Elysium is one of the most unique games that came out this year, marrying one of the most well-written game stories we've seen in years with isometric RPG gameplay. Play as a cop that doesn't know he's a cop in this brilliant game for just $31.View Deal

Hellblade: Senua's Sacrifice: $9.99 on Steam
When Senua's Saga: Hellblade II got announced at the Game Awards, we got plenty excited – all because of how awesome Hellblade Senua's Sacrifice is. This game will take you on a traumatizing path through hell and mental illness, and is an absolutely must-play game. And, it's just $10 right now.View Deal