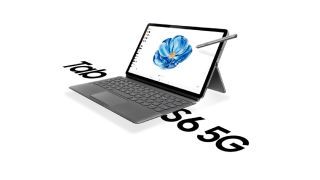 The world finally has its first 5G-capable tablet: the Samsung Galaxy Tab S6 5G has been officially revealed, and it’s virtually unchanged from the existing model aside from its capability to hook up to the next-gen networks.

One caveat: it’s coming to South Korea first, and it's unclear when - or if - it will arrive elsewhere.

The tablet’s unveiling, first noticed by Android Central, comes weeks before we expected it to be shown onstage at Samsung Unpacked on February 11.

The new 5G version is virtually unchanged from the Samsung Galaxy Tab S6 released late in 2019, though it will only come in one configuration of 6GB of RAM and 128GB of storage alongside a Snapdragon 855 chipset, 10.5-inch OLED display, and included S Pen. The big difference: a Snapdragon X50 5G modem instead of the X24 modem that came in the LTE version of the Tab S6.

While Samsung will certainly beat Apple to releasing the first 5G-capable tablet, the real question is: will it matter? LTE-connecting tablets are neat, especially with higher-end Samsung Galaxy Tab S6 and iPad Pro options for on-the-go professionals.

But those are for more niche audiences - and, more importantly, 5G networks are still in their early days. There’s no doubt that some heavy-coverage areas will get the 1Gbps-plus speeds we’ve seen in phones like the Samsung Galaxy S10 5G, but we’ve only seen that in small parts of dense cities thus far.

As those networks continue to build out over 2020 and mature toward the end of the year, Apple won’t seem as behind if it launches a 5G iPad in October according to its usual product cadence. If it doesn’t, well, Apple could seem to be falling as far behind in tablets as it could be in 5G phones.