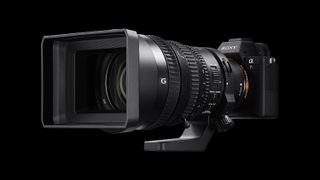 It's been over four years since the launch of the critically lauded Sony Alpha A7S II – and yet, surprisingly, there's still no official word on a successor to the superb video-centric camera. And, in fact, the Alpha A7S III has been rumored for so long that it's earned a somewhat mythical status of its own.

Chatter around the oft-rumored camera certainly shows no sign of dying down, and today's discovery from reliable and prolific camera-news leaker Nokishita offers fresh evidence of its development. Nokishita has pointed to a new Sony name registration "with overseas certification bodies" as further proof of the shooter's existence, with the filings assigning it the codename "WW119533".

While that in itself isn't concrete confirmation of a new full-frame mirrorless camera, British cinematographer Andrew Reid has also recently unearthed details of a new Sony sensor, which he theorizes belongs to the long-expected Alpha.

Considering how long we've been waiting for the A7S III – and given that all Sony's other rumored cameras have actually been released – it's easy for fans to put the two together and hope that the snapper will finally see the light of day.

According to the leaked details discovered by Andrew Reid, the IMX521CQR is a 15.36MP sensor with a Quad Bayer design. This type of sensor uses four pixels for each color square instead of just one. So, even though the pixel size is small, all four work together during low light situations (essentially like a single, larger pixel) for optimum sensitivity and signal processing, while in bright light they revert back to being a regular Bayer filter to increase image resolution.

The new sensor only offers a small resolution bump from the 12MP found in the A7S II, but despite that, the new model should be capable of capturing 4K/60p footage and 15MP stills in crisper quality, with better color details than its predecessor.

This also means that the A7S III (if it is indeed going to be using this particular sensor) will not be capable of capturing 8K footage, although it will be oversampled at 4.8K and should look very much like 6K in a 3840 x 2160 file.

Going by what's listed in the above leaked datasheet, the sensor does seem like it'll be capable of producing some stupendous results – the type you'd expect of a high-end shooter – adding fuel to the rumors of an imminent A7S III launch.

The sensor reveal comes just days after Sony Alpha Rumors published a blurry image of a mirrorless camera, which the publication is confident is the A7S III being tested in the field.

While there's nothing very concrete to go on yet, all the evidence does seem to be adding up. With a bit of luck, Sony may have an official announcement for us in the first few months of 2020. We wait with bated breath.