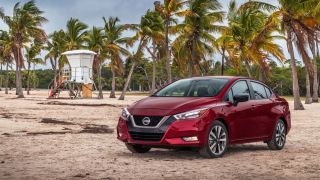 One of the most interesting trends in the automotive industry has to do with third-party add-ons. Modders have added new exhaust systems, hoods, and spoilers for years (even decades), but a new crop of tech mods have slowly cropped up, including rear-view cameras and speakerphones. Recently, I tested one of the best recent tech accessories around, called the Amazon Echo Auto, and for just $30 (it's currently only available in the US) it’s a smart upgrade.

We’re not talking about sensors that suddenly provide automated driving features or robotic features, although maybe that will happen eventually. I tested the Echo Auto with a 2020 Nissan Versa that costs $14,730 (about £11,000, AU$22,000) on its own.

The Versa offers a Bluetooth connection, basic lane-keeping, and excellent gas mileage for a reasonable price, but adding the Echo Auto provided a host of driving aids that surprised me in their simplicity and usefulness.

Connecting the device is ultra-simple. You can sync over Bluetooth to your phone first, then connect the Echo Auto to the car stereo using Bluetooth or the included 3.5mm cable.

I chose the cable just to keep things easy. The Echo Auto then attaches to the car vent using an included mount. When you need to access the device, you say 'Alexa' and then ask your question or issue your command. The sound played over the Nissan Versa's stereo.

I immediately tried a few basic functions. I asked for directions, and – because I used an Apple iPhone 11 Pro – the Echo Auto sent me a prompt on my phone to initiate the navigation. I asked a passenger to accept the notification. I could have used the navigation built-in to the Versa of course, but I prefer using voice. With an Android phone, you don’t have to acknowledge the prompt and Google Maps will start working on its own.

Using Apple Maps with an iPhone was just as easy after accepting the prompt, although you don’t see the route and there is no map. (The Echo Auto only provides audio; it doesn't sync to the display in the car.)

I was mostly interested in other functions, I asked Alexa to play a recent podcast from Freakonomics Radio and it worked perfectly. Later, when I jumped back in the car, I asked Alexa to resume that same episode and that also worked. I tested music playback as well, asked about the weather, and even did some research by asking Alexa some questions. (I asked about when 3D printers were invented and it provided some nice info.)

Next, I decided to ask about the closest gas stations to my current location. I was surprised that it worked. When Alexa reminded me that I could ask about phone numbers, it dawned on me that the device is also a great speakerphone for phone calls. I called my wife by asking Alexa to dial the Amazon Show speaker I have at home and that worked. Someday, we’ll be able to make a video call and turn the car over to the bot, but (for now) only voice calls work.

I could see where this will help in the future. Adding Alexa meant I was able to focus on driving more and didn’t ever fiddle with the radio. I could carry on an entire conversation.

Someday, we’ll be able to ask Alexa to drive the car or to stop, let us out, and go pick up someone at the mall. We’ll stay in contact with Alexa using our phone. It might seem far-fetched, but we’ll use bots more and more when they can do things for us that we don’t want to do.

As a way to augment features on the economically priced Nissan Versa, the Echo Auto was a smart and low-cost alternative. Some vehicles, mostly from Ford, work with Alexa on their own without adding any other products. For this test, I was happy Alexa came along for the ride.