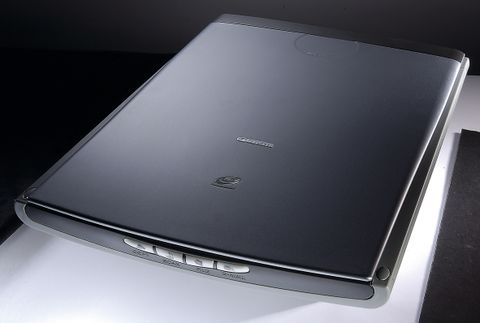 Of course, such a low-price scanner doesn't offer any film scanning function

For casual users, the LIDE 35 makes a great deal of sense

Unlike the other scanners on test here, Canon's budget-priced LIDE series uses LEDs to provide illumination for a contact image sensor (CIS) mechanism, rather than conventional CCDs. LEDs uses much less power that conventional CCDs and also produce a sharp, high-contrast scan. It isn't much good at scanning 3D objects, but for flat documents it's absolutely fine.

Speedwise, the LIDE 35 is a bit slow at 30 seconds for a full A4 scan. The results were very sharp and contrasty, even without Unsharp Mask. Colours were slightly muted and resolution was poor in areas where the page wasn't in complete contact with the scanner's glass platen.

For web and general use, the LIDE 35 is a good bet because of its low cost. With a resolution of 1200 x 2400dpi it is limited, but as most non-film scans are made at 300dpi, there's no point in losing sleep over the numbers game.

Only if you're going to scale up an image, or scan some film, does a high-resolution setting come into its own. Of course, such a low-price scanner doesn't offer any film scanning function, but it does have the advantage of being very light and slim. In fact, it's so light that you can even scan documents with it in an upright position, which should save a bit of desk space.

Also, because the LIDE 35 is a contact image-sensor scanner that uses LEDs, rather than complex mirrors and optics, it doesn't need its own power supply. Power for the LIDE 35 comes via the USB cable from your Mac. This makes the scan speed a little slow, as the whole mechanism is running from a low-power 5v USB port. The four easy-to-program quick buttons on the front for shortcut copying, printing, emailing and regular scanning make a nice final touch. Mark Sparrow