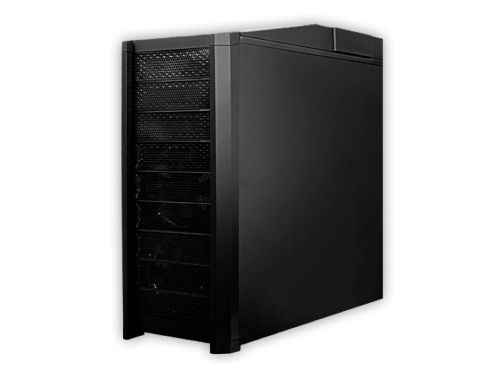 The first crop of Intel Core i5 PCs have already passed across our test benches in the shape of the AdvanceTec Fei-Dao and CyberPower's excellent Infinity i5 Achilles (reviews coming soon), and we likey lots.

Both those machines took a different view to the £1000 price point, with the Fei-Dao putting all its eggs in the base unit basket and CyberPower opting to create a value proposition with a system plus 22-inch monitor to boot.

Here though we're looking at Novatech's Elite Pro - a high-cost base unit running along similar lines to the AdvanceTec rig.

There are a lot of similarities between the Elite Pro and AdvanceTec's Fei-Dao; both machines are rocking a Blu-ray optical drive and stock-clocked CPU with Intel cooler struggling to keep the processor's fever down.

Where they differ is in the storage and graphics used. Both have a full terabyte drive performing storage duties but the Novatech PC we have here hasn't gone down the SSD boot-drive road, instead putting the extra cash towards an extra graphics card.

So Core i5, SLI joy for just over a grand? Well, kinda. The extra GPU is only really there performing GPGPU functions or sitting there pretending it's a PhysX card.

Basically that means for all the extra pixel pushing prowess that the GeForce 9800GT adds to the main GTX275 card, it's not going to amount to hill of polygons in any game that's not trying to convince you that PhysX actually matters to you.

And we all know that PhysX really doesn't matter at all.

From the benchmark results, though, the choice of the GTX 275 has proven to be a good one. Apart from our exclusive CPU-intensive ArmA II bench the Elite Pro has the beating of the Fei-Dao in both Far Cry 2 and World in Conflict, and by a comparatively wide margin too.

And the Novatech Elite Pro once again proves the overclocking prowess of the Core i5 as well; even with the stock Intel cooler we were able to push the chip stably to a carbon nano-tube's breadth away from 3.6GHz.

With the headroom offered by the new Intel chips it's surely only a matter of time before Novatech follows CyberPower's route and ships the Elite Pro with a factory overclock and third-party cooler. For now though, you'll have to take the risk yourself.

CyberPower's brilliant Achilles still has the edge then over the competition we've seen so far. It comes with the factory overclock and a far more wallet-friendly bundle. The Elite Pro does have the edge in terms of graphics power though, pushing it out ahead of the Fei-Dao in performance terms, and thanks to the GTX 275 and with a home-brew overclock, should out-perform the Achilles too.

Still, that's reliant on your overclocking abilities and the risks you want to take with a new machine that's nigh-on £1100. And therein lies the rub, the extra £100 over the other two rigs doesn't get you anything tangible as an extra, and compared to the supreme value of the Achilles bundle, comes up looking short.

The Far Cry 2 result at 1680x1050 is impressive considering it's a frame faster than the overclocked Achilles, but thanks to the stock-clocked CPU it struggles to keep up in the rest. Still the GTX 275 makes an impressive appearance, but still isn't enough to warrant the Elite's extra price premium.