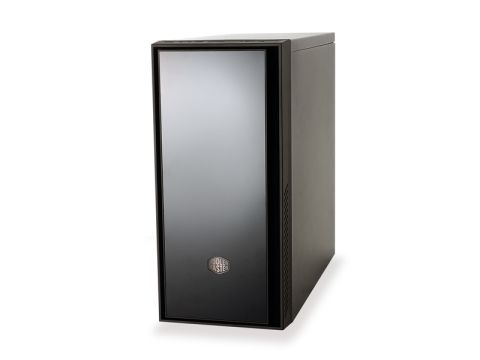 A goos quality case with enough room for big cards, but the noise isn't that quiet

As its name suggests, Cooler Master's Silencio 550 is all about minimising noise.

The inner panel walls are foam padded. The front panel gets some sound-proofing treatment too. And the dust filter for the two 120mm front fans mutes internal whirring further still.

As a concession towards the 'near silent operation' promised, these two front fans are the only ones in the case. PSU, CPU and GPU fans in any system will augment that headcount, but the omission of any top case fans is notable.

Building a system inside the Silencio 550 is easy enough. It's not the biggest case, measuring 210 x 415 x 505mm, but there's plenty of room for large graphics cards and motherboards.

The removable storage bay's handy, and the side mounts for hard drives are a nice alternative to the flimsy cages found in most cases.

We like its understated visual design too. The big problem is that it's hard to feed cables through to the backplate, with just two small holes cut into the chassis. When this domino's knocked over, fixing the rear panel back on becomes a problem too. There is a revision on its way that's meant to fix this issue though.

It's not as quiet as we were expecting either, and temps suffer as a result of minimal internal fans. Cooler Master's own CM 690 offers much better cooling and isn't much louder.