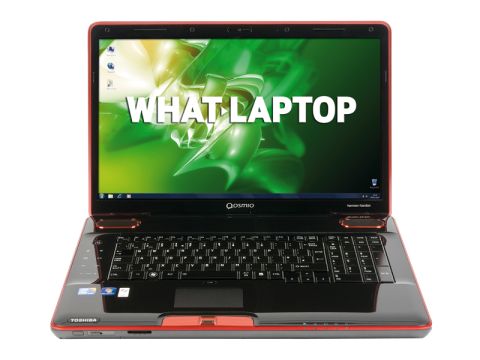 Offering impressive performance and stylish, bigscreen usability it makes a decent choice for gamers, but it isn't without its flaws.

Built around a huge 18.4-inch Super-TFT screen, this is large laptop. The extra screen size makes it ideal for gaming and watching movies, but of course adds to the chassis' weight. At 4.8kg you won't want to carry it far.

The screen itself is vibrant enough, but lacks the brightness of rival gaming laptops, such as the Alienware M17x. It also features quite a low resolution in comparion to most of its rivals again, so while images are certainly sharp enough for most uses, playing games in Full HD is out of the question.

Graphics are equally capable yet underwhelming. The Nvidia GTS 360M GPU is a high performance chip more than capable of running the latest games, but falls far behind all rivals. If you're seeking maximum gaming power, this isn't the machine for you, as the Alienware M17x, for example, doubles its performance.

Where the Qosmio fares much better is in its home office abilities. Powered by a quad-core Intel Core i7 720QM processor and 6144MB of DDR3 memory, this high powered machine easily matches its rivals, breezing through even the most complex of software tasks.

The X500 can also easily be used as a home media hub. A panel of quick-access hotkeys provides easy control of your files and dedicated Harman Kardon stereo speakers delivers far better audio than most laptops are able to offer.

This is one of the most eye-catching machines we've seen of late, but its style won't suit all tastes. The glossy black and red plastics create a vibrant yet understated look, but the shiny surface is a magnet for scratches and smudges.

Thankfully the glossy finish is not carried across to the keyboard. The board itself is very well fixed and we found all keys responded smoothly and accurately. The keys do have quite a long degree of travel, however, which can create a slightly spongy feeling when typing.

Storage is on a par with all but the Asus G73Jh, with the 500GB hard drive providing plenty of storage space. This laptop also features a fingerprint scanner for protecting files against unauthorised access.

While the Qosmio X500-128 is a good multimedia machine, its limited gaming power and lack of a Full HD screen make it a tough sell against its gaming laptop rivals. On its own merits, it's an easy laptop to like, but in this company it falls too far short.