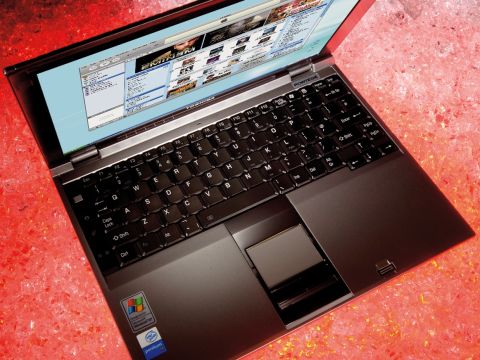 Toshiba has long been regarded as one of the business community's favoured laptop brands and with the Portégé R200 it's easy to see why. This machine weighs a portable-friendly 1.3kg, but manages to pack in a good-sized keyboard and a 12.1-inch screen, large enough for writing and editing documents on the go.

Constructed completely of magnesium alloy, the casing is strong and sturdy with no signs of flex. The screen sits on raised hinges, which proved strong enough to create little or no movement even when using the Portégé on a train. The panel is a standard 4:3 aspect ratio TFT screen, but even without the anti-glare layer, images were sharp and text crisp to look at.

The keyboard may be of a good size, but we still found the keys to be a little too cramped for comfort. While this isn't a problem, it takes a little time to grow accustomed to typing on it. The mouse buttons and touchpad are small, once again requiring an adjustment to grow used to, as opposed to being problematic.

The system is powered by an Intel Pentium M 753 processor. This ultra-low voltage chip has a running speed of 1.2GHz, which is sufficient for office tasks, but won't handle anything too complex. Backed by 512MB DDR2 memory, the R200 scored a Mobile Mark 2005 score of 157, which is in keeping with similar specifications of other systems.

One of the advantages of opting for a ULV processor is the lack of a fan, with the processor merely coming with a heatsink to dissipate heat. To this end, you'll find this an extremely quiet unit to run, especially if you need to use it for presentations.

With no optical drive to take up weight or space, the R200 measures a mere 24mm in thickness. To get to this size you'll find the hard disk is a 1.8-inch drive instead of the standard 2.5-inch. Such drives can only run at 4200rpm at the moment. As the R200 isn't designed as a multimedia machine, this won't prove a problem, especially as we found it to run extremely smoothly in daily use.

When it came to battery life, the 216 minutes of the Toshiba is dwarfed by the 326 minutes recorded by the Sony VAIO from a similar-sized power pack. However, with well over three hours from the six-cell pack, there is little to complain about in terms of performance from this laptop.

The Toshiba Portégé R200 is an extremely sturdy machine to use. It may not have the versatility or power to be your main computer, but when used as a second machine for meetings away from the office, there is nothing to fault in such a solution.