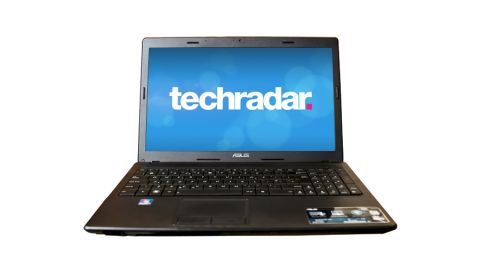 The Asus X54H boasts a USB 3.0 port, which is a welcome addition to the budget sector

Asus has recently been focusing on tablets and smartphones, but its bread-and-butter products are still laptops. The Asus X54H is an entry-level machine with a dual-core processor and several features that make it worth a look.

Unfortunately, the power of the X54H is hidden in an unattractive plastic chassis. The design isn't dissimilar to the Toshiba Satellite Pro C660 - it's a black plastic construction with a rivet-style pattern on the lid and palmrest. There's no glossy effect like you get with the Fujitsu Lifebook, and the result is underwhelming.

A corollary to the design is the weight. The Asus X54H is relatively bulky at 2.4kg. We don't think you'll be throwing it in a bag to take on a road trip, although the build quality is pretty solid. There's very little flex, and we feel it could take a few knocks and keep performing.

Further evidence of its workman-like quality is the screen, which lacks the reflective Super TFT coating that many laptops are treated to. Instead, you have a matte screen that absorbs the light, allowing you to work in brightly lit areas without getting blinded.

The resolution is the standard 1,366 x 768, letting you play 720p high definition content, but stopping short of the full 1080p experience.

Despite its lack of portability, we would probably recommend this laptop as more of a work-based machine than a laptop for media and games (although the 500GB hard drive is large enough for a big music and video collection).

The keyboard is very comfortable and large enough that we got typing quickly with few mistakes. There's a dedicated numerical keypad to the left, which is helpful, although a bit cramped. Similarly, the arrow keys are a little on the small side.

Like other budget laptops, the X54H is packing an ageing Intel Celeron processor. This is the B800 model and runs at a modest 1.5GHz, but the 4GB of RAM means the memory cache is enough to keep the OS running smoothly.

Loading up Internet Explorer and other programs took a little time, but the Asus X54H performed well in our benchmarking tests. Don't expect much in the way of gaming though, as graphics processes are handled by the integrated graphics chip.

Although the X54H offers the usual set of ports and connections (such as HDMI and VGA for connecting to external displays), one of the two USB ports is the newer USB 3.0 format. This is noticeable via the blue strip inside the port, and means that you can transfer data up to 10 times as fast as a regular USB port. You don't often see this feature on budget laptops, but as the technology ages, it should start to become standard.

While still not as well-known as the likes of Samsung, Dell and HP, Asus has proved it can manufacture decent, reliable laptops. The X54H isn't as attractive as the glossy Fujitsu or the business-like Lenovo, but it is durable and hard wearing.

The usable keyboard and matte screen mean this would be a better choice for a working machine than an entertainment centre, but given the weight and battery life (131 mins) don't expect to be taking it out with you for long trips.