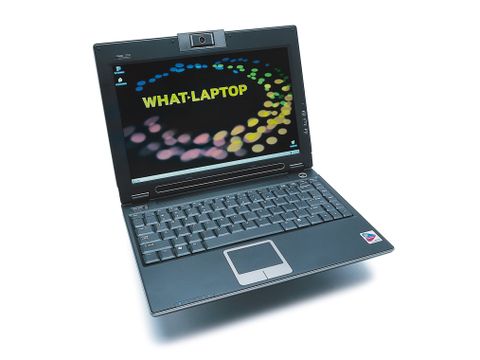 Retaining all of the strong points that gained the Asus its prior accolades, the W5 is still a noteworthy ultraportable laptop

Having recently won acclaim with its original ultra mobile model, Asus now releases the second incarnation of its Asus W5 ultraportable laptop. Cheaper and carrying a higher specification than before, the W5 is available in white or black.

At 1.9kg, the Asus W5 is one the edge of the ultraportable limits. However, at less than 2kg it's still a highly portable system. Inserting the battery adds 18mm at the back of the laptop, leading to dimensions in transit of 305 x 225 x 35mm. While ably sturdy for travel use, the hinged screen unfortunately contains no latch for security. Instead, it uses a magnetised latch. The 12.1-inch TFT widescreen and built-in 1.3 megapixel webcam could suffer damage as a result.

The Asus is equipped with an Intel Pentium M 750 processor. Using Intel's 915GM chipset, the CPU takes advantage of its 533MHz Front Side Bus, for higher performance over Intel's previous 855 chipset.

Still in place is 512MB DDR SDRAM. While the Sony VAIO VGN-S3XP delivers a surprising 1,024MB of RAM, this is still a capable allocation of memory. Less capable than its predecessor is the storage space of the new W5. Where the original W5 had a 80GB Hitachi hard drive, the new model has a 60GB drive. This is ample for an ultraportable though, even with its 4,200rpm rotational speed.

Even with its higher specifications, the new W5 performed slightly below the level seen by its forerunner. Scoring 224 points under MobileMark 2002, the W5 managed to shave 13 points from its previous score of 237. Regardless, this still marked a good score and showed the same notable performance.

Battery life was equally impressive. Running for 220 minutes under test, the Asus W5 delivers exactly the level of extended mobile use expected from an ultraportable laptop. Providing just short of four hours of uptime away from mains power, the W5 supplies enough power for nearly half a day's work on the move.

An area that the W5 previously faltered on was in its graphics. Far from representing a prime concern, this issue hasn't been addressed in the new W5. Using an integrated Intel 915GM graphics adapter, the GPU sources up to 64MB of shared video memory at a time. Scoring 841 points under the DirectX 9 compliant tests of 3DMark 2003, the W5 still scored well in comparison to its peers that all tend to suffer in this area.

As before, the W5 also proved to be a highly usable system. 10/100 BASE-T Ethernet and 802.11g Wi-Fi provide networking capabilities, but disc creation is confined to CD-RW. With a well-designed interface and a sturdy, well-spaced keyboard, usability is excellent throughout. Thanks to the low power requirements of the Asus specifications, the system remained quiet and cool during long-term use.

While the minor flaws of the Asus W5 are more prominent in direct comparison to the strengths of the Sony VAIO VGN-S3XP, the W5 is still a highly impressive ultraportable. Retaining all of the strong points that gained the Asus its prior accolades, the W5 is still a noteworthy ultraportable laptop, and a good choice all round. Alex Bentley & Michael Browne