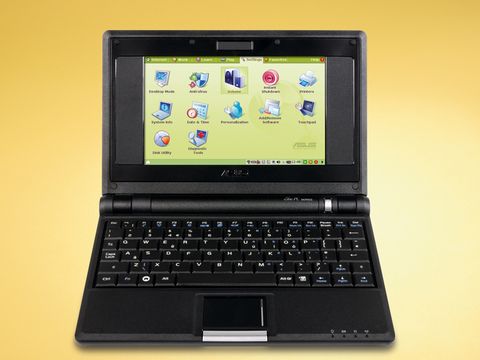 Roughly the size of a hardback book, the Eee PC is portable and easy to carry around

For many, this is the first and by far the most versatile machine in this market. It has set the benchmark and continues to be an impressive mix of price, quality and performance. If you need to write reports when working on the road, this is the laptop for you.

This is due to its size and price having created a whole new entry-level market. Essentially, this is a 7-inch laptop that was originally designed with education and children in mind.

However, the 940g chassis and reasonably powerful specification make it far more versatile than that.

More than just a basic laptop

Roughly the size of a hardback book, the Eee PC is portable and easy to carry around. However, what strikes you first is the build quality.

Made from plastic and available in this country in either black or white, it's tough and robust and will certainly stand up to the occasional drop.

With a 2GB Solid State Drive (SSD), there are no moving parts , which also helps the robust nature of the unit. This limits the number of files you can store, but it will comfortably accommodate the OS and all your major files.

The 7-inch screen uses LED backlight technology, which is cheaper than a standard TFT panel and, apart from helping keep the cost down, means it is brighter than many of its peers too.

The operating system is a variant of Linux and loads quickly into a large icon-driven interface. What makes this machine so versatile is the range of tools pre-loaded.

So you'll find a full Office suite, tools for getting online, as well as a host of power utilities. If you don't like the OS, it will readily support being switched to Windows XP.

It's not only office tools you'll find installed, as the Eee PC also ships with a variety of media tools. With this in mind, we tested it out with audio as well as video playback and found it handled everything with ease, even running a DivX movie straight from a USB memory key.

So the Eee PC can be used as a low-cost movie and music player when on the road without having to install any additional software.

When it comes to usability, Asus has sat the screen in a large bezel, flanking the screen with speakers. This means there is enough room to fit a good-sized keyboard.

As you would expect, the keys are small and compact and you'll initially find yourself picking at the keys. However, we very quickly got used to the layout, making this a great word processor for travellers.

Extras include three USB 2.0 ports, a webcam and 802.11g Wi-Fi, so you can easily connnects to wireless networks.

The Asus Eee PC 2GS more than lives up to expectations and is a reasonably powerful, highly portable machine. The 192-minute battery life may only be suited to the average commute but, as a budget machine, it's clearly a winner.