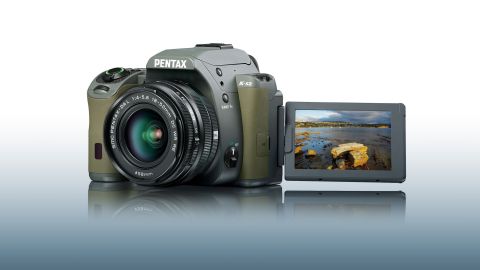 Pentax is pitching the K-S2 as a 'family' camera, but its powerful features, twin control dials and weatherproofing will appeal to enthusiasts too. The specs are like the K-S1's, but the design is much more grown-up.

Ricoh/Pentax introduced its new K-S2 relatively quickly after the K-S1 came out. However, despite the similarities in name, it's not a replacement for the K-S1 – instead, it sits slightly above it in Pentax's range. Internally, it shares a lot of the K-S1's specifications, but much of the camera's physical design and usability has been reworked.

You won't find the KS-1's flashing lights adorning the front of the camera, but that's not the only thing that will please enthusiast photographers. The fact is that behind all the gimmicks and flashy lights, the K-S1 was actually a decent camera, so it's great to the K-S2 using much of the same technology in a much more serious camera.

Pentax claims that the K-S2 is the world's smallest and lightest weatherproof camera, which should make it capable of resisting the odd rain shower or two – particularly useful for landscape and street photographers.

Ricoh/Pentax has thrown in a few other firsts here as well – at least for the brand, if not for the DSLR market as a whole. For example, this camera features a fully articulating screen (though it's not touch sensitive). This screen uses airless gap technology which fills in the space between the LCD and its protective cover in order to improve visibility in bright light.

Another first for Pentax is inbuilt Wi-Fi and NFC, which can be used in conjunction with a free Image Sync app available for iOS and Android to both control the camera and download shots taken with it for quick uploading to social networking sites and the like.

There's more. Pentax has introduced a new kit lens for the K-S2. It's an 18-50mm f/4-5.6 optic, which retracts in on itself to reduce the overall size of the system when it's in storage or when you're carrying it around.

Unlike Canon and Nikon, which use lens-based image stabilizers, Pentax uses a sensor based SR (Shake Reduction) system inside its DSLRs, including the K-S2, to help reduce blur when hand-holding the camera.

Other useful features include 5.5 frames per second continuous shooting and a maximum shutter speed of 1/6000 sec – that's a touch faster than most of its direct rivals, which offer a maximum of 1/4000 sec. The benefit of fast shutter speeds like this is not simply for freezing fast-moving subjects – you can also shoot in bright light with wide apertures to increase background blur without overexposing.

The sensor is the same one you'll find in the K-S1: a 20-million pixel APS-C sized sensor which features a maximum sensitivity of ISO 51200. There's no anti-aliasing filter here, which is starting to become increasingly common and helps to maximise the detail output of the camera. In order to avoid the problems associated with this design – namely the risk of moiré patterns appearing when photographing something with fine repeating patterns – Pentax has come up with a novel and interesting solution. If see any moiré effect, you can use the camera's anti-aliasing 'simulation mode to retake the shot. This applies a tiny vibration to the sensor during the exposure, minutely shifting the photosites and therefore replicating the effect of a low pass filter.

The autofocus system has 11 AF points that can be used with the K-S2, of which 9 are the more sensitive cross-type. This is not the most sophisticated on the market, and you may find the system quite coarse and noisy when using some of Pentax's cheaper lenses which don't have their own AF motors. The new kit lens does, however, have its own built-in DC motor.

The KS-2's viewfinder not only offers a 100% view, but it's also a proper glass pentaprism – cheaper DSLRs tend to use a pentamirror which offers only 95%, 96% or 97% coverage.

There's full HD video recording, as you'd expect in an up to date DSLR, while a range of digital filters and the ability to process raw files in-camera round off the specifications list of the K-S2.