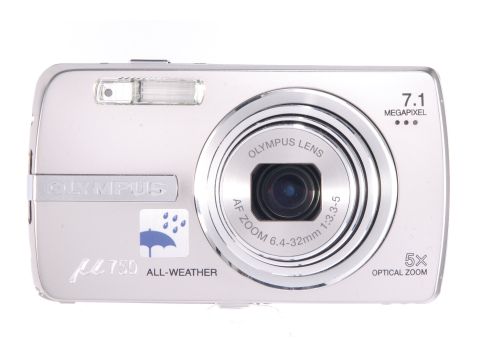 Like previous Mjus, the new 750 model is a stylish beast, featuring a tapered curve to the metallic silver (or black) body. Being narrower at one edge (24mm), the zoom barrel stands slightly proud even when not in use. Resolution maxes out at 7.1 million effective pixels, while an internally stacked 5x optical zoom (36- 180mm equivalent) is an improvement on the 3x usually found in this class of camera.

An all-weather casing and Bright Capture technology - where the camera boosts ISO sensitivity to cope with low light photography without flash, also enabling LCD screen brightness up to four times that of competing models - has been retained from previous generations, and is now accessible in Movie mode.

Confirming that this is a model aimed at the point and shoot brigade - and with the above features, it's destined to be hit at Christmas parties - the 750 features a built-in function guide providing brief explanations, handily implemented with a button press.

Of course, shooting at higher ISOs introduces the possibility of visible image noise, while the longer zoom range threatens camera shake at maximum telephoto. Making the most of that additional lens capacity, Olympus has introduced what it calls Dual Image Stabilisation; basically a combination of faster shutter speeds at higher ISOs and a built-in gyro sensor that detects external hand wobble and minutely shifts the CCD to compensate for movement.

The Mju 750 powers up ready for the first shot in two seconds, with the zoom lens extending to maximum wide angle setting and the 2.5-inch screen bursting into life. In the absence of an optical viewfinder, this doubles up for shot composition and review.

Though it boasts the supposed clarity of a 215,000-pixel resolution, it displays ghosting indoors. However, this is not too off-putting. In Capture mode, nine-zone compositional grid and live histogram can be accessed with the display button.

Above this is a pressure sensitive and reasonably responsive zoom lever, while below is a four-way control cross with the OK/function button at its epicentre, flanked by buttons for calling up the on-screen menus, display, direct print and rather usefully, deleting duff images on the fly.

As we've found before, Olympus cameras sometimes get confused by contrasty scenes, overcompensating for shadow areas, and when choosing the available light mode, select a higher ISO value than required.

The result: bleached-out highlights and image noise. Recomposing the shot helps, but it can be hit and miss. Like most digital cameras, the 750 operates best with well-illuminated subjects under clear blue skies, though there's occasional pixel fringing.

Olympus's trademark handling of colours is to err on the side of natural, if slightly muted, rather than vivid and well-saturated. Camera shake appears most pronounced when attempting macro shots or low light close ups, and it seems not even the CCD shift mechanism can eradicate this.

Good results are achievable, but you have to work for them harder than you should on a fully auto snapshot camera. Overall, it's a good effort, but could be better. Mark Harris