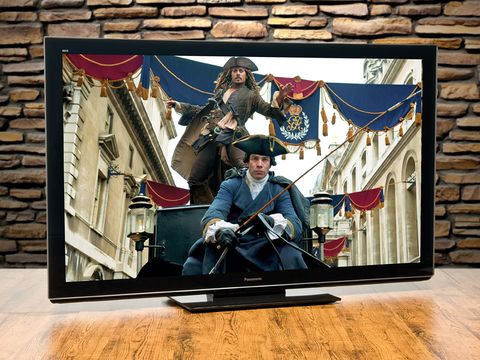 The size of a man o' war, the stupendous 65-incher is well worth its high price tag

One unexpected side effect from the growing take-up of 3DTVs is that folks are migrating to larger screen sizes. This means a warm welcome should await Panasonic's TX-P65VT30.

This 65-inch iteration of its top-of-the-line NeoPlasma range is a glorious extravagance. The sheer size obviously poses a challenge. It takes three people to get it out of the box and the 56kg weight means wall-mounting will require some serious planning. It's a good thing then that the supplied pedestal is smart and substantial.

Engorged as it is, the design works well, with the edge-to-edge glass fascia taking on the appearance of a French window.

Connectivity options are standard fare. Wi-Fi isn't built in, but Panasonic does include a USB Wi-Fi adaptor in the box.

A screen of this size is completely unforgiving when it comes to visual shortcomings in your sources, but feed it a Blu-ray and it shines. The VT30's picture is both refi ned and nuanced. Quite aside from the massive amount of fine detail on offer, the screen has extraordinary dynamics with stygian black levels and searing peak whites.

At times I actually began to wonder if the panel, which sports the brand's High Contrast Filter Pro, for improved luminous efficiency, looks too black and contrasty. But of course, there are plenty of parameter controls available to constrain it. In truth, this is not a difficult set to calibrate; the Normal median is already good, just ease down the sharpness and tweak contrast to taste.

It's slightly inconvenient that none of the regular picture parameters have numerical counters; these only appear in the ISF modes. Alternatively, you could just engage the THX 2D preset – it's well-judged for movie watching. Not only is the set's regular HD image terrific, but the screen's 3D performance is outstanding.

An unsurprisingly high power measurement with our 100IRE test. With movie material, the average figure is somewhat lower.

Contrast nowhere near the ludicrous claims, but a good post-calibration figure. Luminance measured at 9.5fL.

Panasonic has cured traditional double imaging problems with faster phosphors and new Crosstalk Reduction circuitry. The result is a stereoscopic image that's wonderfully convincing; the THX-certified 3D picture has tremendous depth. Once you clip past 60 inches, 3D at home starts to make quite a lot of sense.

The immersion experienced in the cinema is replicated by this massive screen. Tron:Legacy (BD) once again feels majestic and those sporadic full-frame sequences, which look kinda odd on a regular telly, suddenly get their old impact back.

Of course, this flagship TV offers other trimmings too. Its media streaming is excellent, with bulletproof video file support (including MKV), as well as music with album art – when it comes to multimedia integration Panasonic is giving its rivals a lesson.

The Viera Connect IPTV portal is well-stocked, too, and Skype functionality is offered. Be warned that IPTV sources viewed on this scale do look pretty ropey.

Panasonic's YouTube client really suffers. It's not that hot at the best of times, settling for SD rather than streaming 720 HD when it's available. Let's hope this limitation is addressed with a firmware update (hopefully to YouTube Lean Back) sooner rather than later.

Overall, though, this is a traffic stopper of a TV. The quality of Panasonic's VT30 panel and the accompanying picture engine isn't diminished by the size of the screen beast. Indeed, if anything it's enhanced, with 3D a spectacular beneficiary. It's almost like having your own personal IMAX.