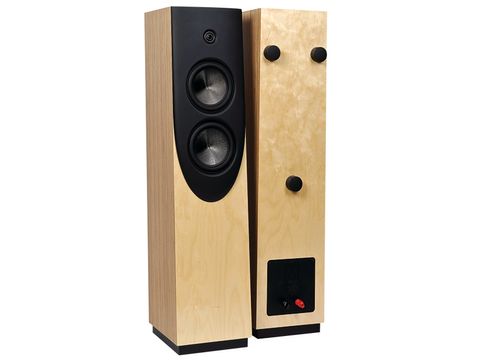 Though the Magico may not look a world apart from other speakers, it is

Accomplished mid size speaker that sets new standards in most areas and comes close in most others. Its high pricing derives directly from its superb, painstaking engineering, the result of which is an impressive musical performance

Despite its seemingly conventional appearance, in our opinion, Magico is the most exciting loudspeaker introduction for several years. The V2 is the entry-level model in the Magico range, which stretches to £35,000 for the Mini 2 and then there are the big, seriously expensive models which are marked POA on the price list.

In the US, the company is seen as a key competitor (perhaps we should say the key competitor) to Wilson Audio, which for many is the high end epitomised.

The Magico V2 looks ordinary enough at first glance: a 2.5-way floorstanding medium size speaker with a shape that's familiar from many other makes. Check out the Mini 2 and you will see that Magico is not locked into making speakers with the form factor of the V2. The relative simplicity of this particular model is intended to ensure that its pricing is accessible.

But it is not as simple as its appearance suggests. Leaving the exquisite finish to one side, one difference is that it is a sealed box/infinite-baffle speaker, while its rivals are invariably a variation on the bass-reflex ported theme. Second, the enclosure is built with an integrity that is second to none and this also applies to many of the finer details, the crossover in particular.

So why a sealed box, you ask? Alon Wolf's response, when he was caught on his way to catch a plane, was somewhat Delphic. Yes, there is a very good reason not to use a bass reflex, but only if one can execute a sealed design properly.

Reading between the lines, we believe his thinking is that a reflex alignment is by nature excessively resonant and inherently compromised, which can result in systems that can be difficult to control. A sealed box alignment offers slower attenuation in the lower frequencies, albeit starting from a higher one. The danger is that the balance between the two will be audibly lean. Read on to see if this is an issue.

Having established that this is an almost uniquely exacting design that reinvents the very grammar of high-end loudspeaker design, we must also report that it is just as impressive on audition. The V2 is a lot more than just an engineer's wet dream.

It is difficult to know where best to start, as this is an unusually seamless performer. There is no detectable discontinuity between the bass, the midband and the treble. Each seems to grow organically from its neighbour, which in itself is quite remarkable.

The exotic tweeters that some of Magico's peers use are blessed with some great qualities, but generally, their performance cannot be described as seamless. They have a distinct sound of their own.

This said, the Revelator tweeter is clearly a different and superior animal from the early version of the same model, which generally could be heard in their own right. This may well be related to how it is integrated into the midband and bass.

The main part of the midrange is particularly impressive: it is expressive, finely detailed, layered and free of any obvious colourations. It also has the kind of delicacy and transparency that is more often associated with the world of electrostatics.

There were some superb passages during the test, for example, of Brahms's Alto Rhapsody. But making too much of particular pieces of music is missing the point with a loudspeaker that was both as easy to listen to and live with, as it was musically informative.

So is the balance lean? A little, yes, but not too much so. What the V2 lacks is that slightly loose underdamped upper bass, too beloved of many high-end speakers and, in particular, speakers from the US. The V2 is fast, taut and agile and there is no noticeable bloom, still less room boom.

Room positioning is best with moderate toe-in to hit the tweeter's hot spot, but there is no need to dial-in room reinforcement, by placing the speakers near walls or by encouraging early reflections. Just the opposite, in fact.

The speed and articulation of the bass is best when the V2 is in open, unobstructed space. That said, the Magico is not as pernickety about room placement as some other speakers that we can think of.

But it is fussy about amplifiers. It likes very clean amplification and plenty of it. It worked well with the Krell FBI integrated, but it also worked beautifully with the Esoteric A-03. Bridged A-03s, which yield 200 watts per channel, would probably be even better.

One anecdote from a test that was full of incident is worth recounting here. A product manager who represents the competition, and who was openly sceptical of the V2 in conversation, was clearly shaken and, yes, stirred, within seconds of the music starting. We even detected tears welling up in his eyes! This is truly a loudspeaker that drills down to the musical depths.

It is very rare for sound and technology to converge so precisely on the same goal, but this is exactly what has happened, in this case. The V2 is a painstakingly designed and immaculately voiced, loudspeaker.

It covers all but the final few tones of the full audio band, can go loud and can convey the essence of a musical performance in space, like few others. It's expensive, yes, but given what has gone into this design, we are prepared to suggest that it is good value and have marked its score sheet accordingly.