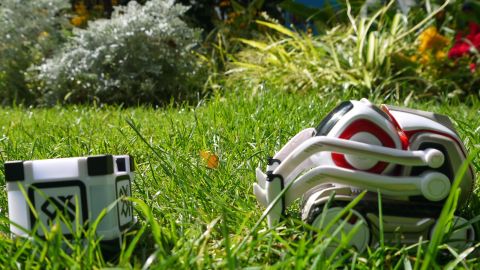 Cozmo is a joy to use, a fun and intelligent - albeit pricey - connected toy that will have adults behaving like kids and kids performing code like adults.

Hollywood has a lot to answer for when it comes to our perceptions of Artificial Intelligence, or AI. Sure there's always a chance a Skynet-alike AI system will take over the world one day. But one area it's making big waves for the better (so far at least) is the toy sector.

Over just a few short years, the number of toy creators bringing AI products to market has grown. Now big names and smaller start-ups are putting a friendly face on AI and making awesome products that are built for fun, and also for learning.

One of our favorite AI toy companies is Cozmo by Anki, which ticks all of those boxes, bringing kids aged 8 years and up an educational toy that'll (hopefully) also make them actually want to learn more about AI and programming in the future.

And the best thing about the Cozmo toy is it's already getting better with age. That's because in December 2017, Anki released a big update to its Cozmo Code Lab app. A free app update brought an expansion pack that expanded Code Lab's capabilities to include if statements, math operators, variables, function calls and much more.

Fingers crossed Anki continues to make significant upgrades like this more and more in the future.

Released in the US in 2016, Cozmo is a small gizmo that does a number of things. Of course it’s a toy, and a fantastic one at that. But it’s also a device that will help those who use it to learn how to code.

Thanks to its successful launch in the US, it was available shortly after in the UK as well. And since its launch in the UK, it's packing a number of newer features, thanks to the big app update we mentioned earlier.

Cozmo has become a massive attention seeker and it's adorable.

For the uninitiated, Cozmo is a small-form robot that's got a personality. While this personality took a little figuring out when Cozmo was first released, the new app updates mean that within minutes you get to understand just what kind of interactive toy it is. More on this later.

Looks wise, Cozmo is a cross between Wall-E and a digger. It's got two treads that help it move along - which are customisable, with a number of colorful options available as optional extras - an outer plastic shell and a small cubed face on the front.

Interestingly, the name Cozmo isn't seen at all on the device, but Anki branding is emblazoned on the back.

Cozmo is small - it's palm sized and light to pick up but it also feels well built and sturdy.

There's a couple of lights on the chassis: one on the top which changes color depending on what Cozmo is doing. There's also a little LED on the front. Underneath there's a charging plate and a sensor. On the front of its face, is a camera and another sensor, and there's a digger-like arm attached to the front.

This is an important piece of the puzzle. As it's with this arm that Cozmo interacts with the three power cubes that come in the pack. Also in the pack is a charging dock, where Cozmo goes to get power and to sleep.

Out of the box you need to charge Cozmo. This takes around 30 minutes to do - this equates to around 90 minutes' play time - which gives you enough time to connect up Cozmo to its accompanying app.

Connecting is actually quite a serious process, and one that may be a tad frustrating for younger users. When you load the app up, it connects with Cozmo through its own Wi-Fi, you are then presented with a very long numerical code that is situated on Cozmo's face. Also, your Cozmo needs to be in the charging dock for it to connect.

The numbers for the code are tiny, but the idea is that you tap them in then the device is secure and you should only have to do it once, unless it decided to reset itself.

Once done - it's a tad laborious - the app, which is available for both iOS and Android, is hooked up to your Cozmo and you can play... and that's when the fun really starts.

The latest app update is a significant one for both old and new users. It essentially makes Cozmo needy. Anki has gone down the Tamagotchi route of having to cater to your Cozmo to make sure it is getting the attention it craves.

Called Needs, the idea is that you have to play with Cozmo, feed it and also give it regular tune-ups. Most of these were actually part of the old app but now they are front and center.

The good thing is that none of this feels like a chore as you will enjoy interacting with Cozmo and seeing its myriad expressions.

Take, for instance, Energy. This is one of the Needs that has to be topped up. The idea is that it gets energy from one of the three power cubes. All you have to do is shake it until you hear the energy grow, put the cube in front of Cozmo and it sups the energy from it. It's great to watch and the sound effects are perfect for it.

Then there's Play, this will make up a significant part of your time with Cozmo. You keep its play energies up - all of these are presented in a nice visual - by interacting with it, doing stunts and also help it learn faces.

The latter is one of the first things you should do. Cozmo will recognise a number of faces, just add in your name and let it stare at you for a few seconds. It'll get excited and say your name back to you in a childlike way. And the next time it sees you, it will recognise you. Trust us: it will make you smile.

It will also learn words too. This is a lot of fun, even if the childlike way it repeats them back is sometimes garbled. And, before you ask, yes we did try a number of 'naughty' phrases and Cozmo being the good robot it is refused to say them, getting a little angry and embarrassed at the prospect.

It gets angry quite a lot, actually. If you pick it up for too long it'll get impatient and it really doesn't like being pushed over. It's not just noises that it makes but facial expressions, too.

When you first play with Cozmo you have to do a number of these things to get the device at optimum levels but it's a lot of fun and acts as a really good tutorial for what's to come.

And there's loads more you can do, we've only just scratched the surface. These new features, however, gamify having a Cozmo.

Do enough things with Cozmo and you will earn points which can be traded in for new upgrades and the like. It means that you will want to play with your 'bot daily and it also means there's less chance of it gathering dust in a child's room.

Another thing you won't get enough of is watching Cozmo play with its power cubes. It's a genius idea by Anki to supply three power cubes as they can be used for a whole manner of games. It also means that instantly Cozmo has its own landscape and objects to play with and within. There's a number of little side games you can play to try and beat Cozmo, including a rather quaint but fun game of Quick Tap - a color version of snap.

Perhaps the most impressive part about the app, however, is the code lab section. It's here where the real brains behind Cozmo lies. It's a simple, intuitive interface that allows you to link up a number of blocks together and 'code' Cozmo to do a number of things. It's a brilliant way to understand what makes the robot tick and will serve for hours of enjoyment.

The coding language underneath the hood is Scratch but what Anki has managed to do is simplify complex arrangements so it never feels like schoolwork - but you will feel educated after doing it.

You will laugh, smile and fist-bump along to Cozmo and the 'bot will follow you every step of the way. Cozmo is an intelligent, fun toy that may look simple but its cute exterior hides a complex AI brain that you can tap into thanks to the updated and easy to use app.

Although the box says from 8 years and up, Cozmo had this 30-something smiling time and time again - it's a connected toy that truly connects.