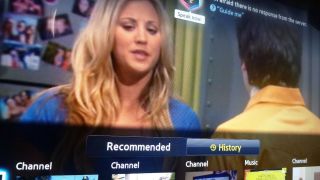 This week we found out that Samsung TVs don't actually transmit voices of viewers back to HQ for analysis and forwarding to GCHQ, but that's OK because we were only pretending to be bothered about it to have something to talk about. Weren't we?

Who, in all honesty, believed the headlines that suggested our daily conversations were being uploaded to a Samsung server by our televisions?

Imagine the tedium of being the person in charge of tracking billions of daily conversations. And what would Samsung be looking for among that mine of data? Complements about the thickness of its bezels? People talking about being a bit thirsty so it can serve Coke ads? How boring the future has turned out.

It was your typical internet storm, obviously not really true if you paid attention, but possible enough that the whole online world pretended it might be so Samsung could be Social Media Enemy of the Day.

For a few hours, though, before Samsung said it was all a case of poorly-worded terms and conditions, everyone was (only pretending to be) up in arms about the possibility that Samsung might be building the mother of all personal data mines.

Over on the Daily Mail, where people tend to think everything is true no matter how bizarre it might seem, the raging would've made North Korea proud.

Reader Bill Loni thinks it's banking data for use against us on the future, suggesting: "For most people none of this private information will ever surface. But, if one day you rise to prominence and become a thorn in the side to powerful people then all of a sudden they can go back and find all of this private information on you and it will somehow be leaked, and your most private views or deviances suddenly are there for the whole world to see."

Everyone will know you had to ask your partner what was going on in the middle of a film. You will be ruined.

Tony, meanwhile, is more worried about supposed Google, posting: "Google can track your activities across 80% of websites, and it ONLY makes money from using your information to sell advertisers better placed adverts. Worry about that."

Which didn't worry commenter Karts, who must be a tech industry stooge, who replied: "What terrible thing do you envisage happening because of that? Targeted adverts? Oh no, I might get adverts for things I might actually want!"

There's no such thing as a nice advert. They'll end up driving us away from all technology - in fact, just look at how unwelcoming ad-packed mobile games are these days.

Over on The Register, talk turned to how you might block such activities in a future world in which the internet of things is real and not just a marketing term to help sell 4G contacts.

Reader Anonymous Coward asked: "The key is if all of this data collection can be opt-in/out. Will there ever come a time when it's illegal or impossible for me to block the connections to the Net? Heaven forbid that they ever use safety as an excuse to mandate the use of IoT data collection. For example smart smoke alarms or cooking appliances that notify when there is a fire."

He's well up for a bit of surveillance conspiracy too, outlining this nightmare scenario: "Imagine a TV in a conference room that leaks juicy corporate secrets.. Or mistrials from breach of attorney / client privilege... Or just imagine all the juicy titbits that could be gleaned from TV Tapping the homes of executives, politicians, diplomats, journalists and whistleblowers etc..."

Except it's probably not actually happening. At least not yet.

The Independent's coverage went down the predictable 1984 route, comparing the possible listening TV to the vision of George Orwell's privacy-banning future.

Reader Timestar is this week's voice of reason, asking: "To an extent this article misses the point. What about the hundreds of CCTV cameras in towns, cities across the world? Every time you use your credit/debit/loyalty card? And so on and so on..."

Yeah but that doesn't affect our EastEnders viewing time, Timestar.

Reader CXXL hopes this might be the latest infraction that finally gets the public interested in security issues, saying: "You either become some shut in survivalist or you learn about what is going on and carry on living your life with such knowledge and try to pass on the information to those who don't know and rally round to support privacy rights."

While Squidapedoyt is actually quite impressed by the bravado in such mass surveillance, saying: "If there had been a proposal that everyone should be compelled to carry a device which constantly reported their position to the authorities, there would have been howls of outrage. But as it is, we have not only consented to do so, we pay for the privilege."

And will continue to do so, especially when they make one that's a bit thinner.