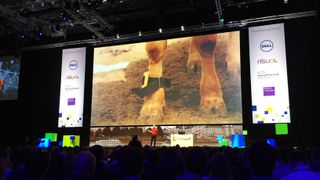 You may still be trying to figure out the point of internet kettles, but over in Japan, connected cows have marked a significant step forward for farming.

Microsoft's VP Scott Guthrie, speaking at Future Decoded in London, recounted the way in which Fujitsu has solved a major problem for dairy farmers.

Cows go into estrus (essentially go into heat) for a specific amount of time, and noticing this and acting on it has been a key problem for farmers.

One farmer in Japan asked Fujitsu to help with the issue and, using ankle bracelet pedometers, behaviour research and cloud analysis has made an enormous difference.

"Fujitsu came up with a detection system simple secret for detecting estrus because at the time of going into in heat the amount of steps shot up," said Microsoft's Guthrie.

"They worked out that it was 90% accurate in a controlled environment and that actually in that window of insemination, if you inseminated in the first half you'd get a male calf, and the latter a female calf.

"And even those false positives were useful because the increased steps in those often were because the cow had jumped the fence - which was also worth tracking.

"None of this would have been possible without the internet of things, advanced analytics and the cloud."