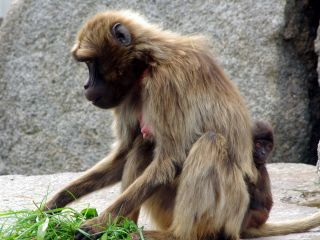 American scientists have hit on a way to reverse paralysis in monkeys through the use of brain implants. The inventors claim it could help people paralysed by spinal injuries regain control of their limbs.

According to New Scientist, the implants are equipped with mobile electrodes that seek out and restore neural connections between the brain and the rest of the body. Following trials, a monkey was able to move its wrist despite having a paralysed arm.

So far it's only been possible to maintain the connections for around four weeks; but researchers are hoping to improve this in a more permanent solution for humans.

In other news, police have arrested a would-be thief after the bungling burglar became trapped in the lift of an office block he'd just robbed.

Heinrich Klopp was found with computers, mobile phones and other electrical goods, Ananova reports, which he'd swiped from the sixth floor of the building. So heavy was his bag, the hapless criminal decided to take the easy route down to his getaway vehicle by jumping in the lift.

Unfortunately for Klopp, the lift stopped between floors, trapping the 27-year-old German and forcing him to call the fire brigade.

"I nearly got away with it until the lift broke. I had no option but to call the police," he confessed. "I tried to hide the laptops in the corner but I knew I was done for as soon as they clasped eyes on them."

Meanwhile, telecoms giant NTT reckons it's hit on a solution to put an end to your portable gadgets running out of power when you're on the move – literally. The company is developing shoes that generate electricity as you walk.

Every step taken forces water stored in the heals through a tiny turbine. According to Physorg, current prototypes are able to generate around 1.2watts; just don't stop walking…

If your legs do get tired, perhaps you could stick a pair (or two; bonus) on the feet of the Walking Chair instead.

The four-legged wheelchair replacement was spotted earlier this week, and deserves a mention. It seems like a strange concept now, but fast-forward a few years and the tech could have real benefits for the elderly and disabled.

Here's an invention worth having: the as-yet unnamed device is, essentially, a motion-detector rigged up to a blender and a strobe light. What's the purpose?

The creator originally set it up to "scare the crap" out of his cat, which would persistently jump up on the kitchen counter (brilliant video footage here). However, we think it could also be applied to irritating housemates/ hubbies/ children [delete as applicable].

Join us next week for more Weird Tech: The week's strangest stories, all in one place…