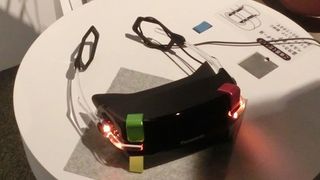 There was a time when Oculus Rift was the only virtual reality headset that mattered. Then Sony weighed in with Project Morpheus, and for a while there was a bit of a rivalry going on.

Lately it seems everyone is trying their hand at virtual reality, though, from Google and LG to toy maker Mattel - and, most recently, Panasonic.

The Japanese company this week showed off its own VR headset, which is more similar to the Rift and Morpheus than Google Cardboard or Gear VR - it sports its own OLED display instead of interfacing with a smartphone.

However in form it looks more similar to Gear VR than the Rift, with a front-heavy design that hooks onto users' ears like a pair of glasses.

The screen outputs at up to 75 frames per second with 90-degree viewing angles, but for now it's just a prototype and that will likely improve.

Panasonic showed off the headset alongside an omnidirectional camera, similar to Samsung's Project Beyond, that it reportedly hopes to utilize during the 2020 Olympics in Tokyo.

Hopefully we learn more about it before then, though.