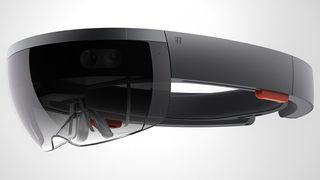 Microsoft revealed more details about HoloLens at Build 2015, posting a YouTube video and blog post detailing some of the hardware that runs the AR viewer.

First off, it's important to note HoloLens isn't tethered by wires or needs a phone or PC connection to function. It's hands-free, so users can interact with the world unencumbered by controls or a keyboard.

According to the blog post, the HoloLens weighs "significantly less than the average laptop," so it seems Microsoft has cut down some of the bulk we experienced in our initial hands on. We'll be trying on HoloLens later today and will report back just how heavy HoloLens is. It can adjust to head-size and accommodate most eyewear, according to Microsoft.

The lenses are see-through and high-def. Using "an advanced optical projection system," HoloLens can transmit multi-dimensional, full-color images with low-latency onto users' view of the real world.

HoloLens employs spatial sound, so holograms in all directions are heard loud and clear. According to Microsoft, HoloLens will pick up sound from a specific location, creating sounds as you would hear them made by something in real life.

The viewer has a microphone array to pick up voice commands and a photo/video camera that lets wearers' share what they're doing with others. There's also a depth sensor that spatially maps wearers' environments.

An advanced sensor unit called the inertial measurement unit (IMU) contains an accelerometer, gyroscope and magnetometer. The IMU plus the head-tracking cameras allow HoloLens to keep track of your head movements.

The last bit Microsoft dove into was its processors. The HoloLens has both a GPU and CPU, but also a third processor called a Holographic Processing Unit, or HPU. We've heard about the HPU before, but now we know it's what lets HoloLens understand were a user is looking, their gestures and to spatially map the world around the user.

The HPU is a Microsoft designed and engineered bit of hardware ... and that's about all the details Microsoft provided on the chipset.

We're promised HoloLens will make an appearance at E3 2015, so look for more on the viewer and particularly how it will work with Xbox One and other gaming applications.