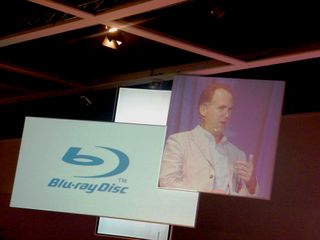 The future of Blu-ray is 3D, according to the Blu-ray Disc Association, and that future may be coming sooner than you think.

At this year's IFA conference, with TechRadar in attendance, the BDA held a talk which confirmed that 2010 is a significant time for 3D and Blu-ray – reiterating the news that both Panasonic and

will be releasing 3D-based TVs in 2010 – and that the date for nailing down a specification for 3D Full HD Blu-ray is "December".

"Blu-ray is ideally positioned to be the catalyst that brings 3D entertainment into homes," explained Ben Carr, from Walt Disney Home Entertainment and the BDA.

"Why now for 3D? It's all about technology. Digital cinema has enabled us to do things theatrically as we couldn't do before, and now we can do the same in the home."

Carr then went on to explain just what the specification for 3D on Blu-ray entails. "The BDA is a format development group, and we need to create a set of guidelines and specifications.

"Basic priorities [for the specification] are: 1080p per eye, internet connectivity and backward computability with a 2D product.

"Consumers expect that the 2D product they have bought so far, should work in the 3D players. So new players should play the old product.

"We work with MPEG, HDMI in creating this set of guidelines. They have been approved, so now the technical groups within the BDA are to create the products with these specifications.

"The specifications should be out in December."

Carr did say that Disney is also looking into other methods for 3D distribution, one of which is the internet.

While the UK is still some way off for decent enough bandwidth to pipe through dual 1080p video streams, it's something Disney is interested in.

"We're talking about 3D delivery to IP and broadcast," Carr noted. "But there is some technical limitations there – like bandwidth – so Blu-ray will be the premium channel for now."