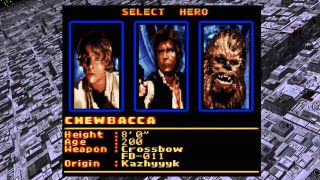 Looking for the best Star Wars games ever set in a galaxy far, far away? Ever since George Lucas decided that you could slap the Star Wars logo on pretty much anything and sell it, we've been treated to a number of stellar video games mining the series' rich world of intergalactic bounty hunters, mystical Jedi, and enemy Stormtroopers for all their worth.

For nearly four decades, Star Wars games of every description and genre have graced every available gaming platform, from handhelds to home consoles to arcade machines. Saber-slashing brawlers, asteroid-avoiding flight sims, Rodian-rocking racers – you name it, the expansive Star Wars universe has facilitated a wide and wonderful range of video games.

With that said, having played pretty much every Star Wars game there’s ever been (for my sins, I was one of the idiots who bought The Phantom Menace tie-in game on the original PlayStation), I can with a slightly heavy heart admit that for every good game in that digital star system, there are three or four rubbish ones.

When the Star Wars license is handed over to a developer that loves the series as much as the millions of Jedi-wannabes do, the games can be seriously great. (We're certainly staying attentive for the release of Respawn's Star Wars Jedi: Fallen Order later this year.)

From arcade showstoppers to new VR highs, the Force is strong with these, the very best Star Wars games from across the galaxy.

We’ll kick off with a couple of games that, while enjoyable in their own right, just haven’t quite made the cut for this list.

First off, the Xbox and Windows’ Star Wars: Republic Commando.

A squad-based shooter set during the prequels’ Clone Wars, it’s a solid game, often cited (in purely technical terms) as one of the best Star Wars games ever. But, it doesn’t really feel like a Star Wars game. It’s more like a Tom Clancy title with Metroid’s UI. And the fact it’s set amidst the worst of the prequels doesn’t help its cause. Good game? Yes. Good Star Wars game? I’d argue no.

Giving you the chance to play as Darth Vader’s Force-fuelled Dark Side apprentice, it had all the trappings of a great Star Wars game -- good lightsaber battles, big set pieces, great use of iconic characters and high production values. But it’s a relatively short game, and one that becomes quite repetitive, as if the developers ran out of steam (or more likely, money) halfway through. Definitely worth picking up in a Steam sale for a solid weekend spent in a galaxy far, far away.

Now, onto the main event...

Let’s frontload this entry with a big caveat - Star Wars Galaxies was not a great game. The now defunct MMO went through so many revisions as to even alienate its biggest fans by the time the 2003 title shut down in 2011.

But what Galaxies had was unbounded ambition and great ideas, if not always the means to implement them. Rather than being fully combat focussed, Galaxies was all about the community. Want to be the Cantina bartender? Sure, you can make an in-game living that way. Or an artist? Or a smuggler? Or a musician? Or taxi service. All possible. Want to own your own home, your own plot of land? All this was promised, as well as the usual “route to being a Jedi” stuff.

Even better, it knew the magic of the universe - although this was later overturned (a change which was vocally resented by core players) initially only a handful of players would ever become Jedi, after fulfilling a gruelling set of criteria.

But many of its best ideas were eventually watered down, crushed under the weight of ambition and the juggernaut threat of World of Warcraft. While Bioware’s The Old Republic MMO would eventually arrive as a much more polished (and less exciting) online Star Wars game, it’s only been Galaxies that’s ever truly approached that sense of living and breathing in the Star Wars universe.

There have been a fair few Star Wars RTS games - which totally makes sense. It’s called Star ‘WARS’ after all, and arguably the whole series’ greatest scene is that land-based battle on Hoth. Of the numerous strategy games, Star Wars: Empire at War was the best.

Letting you play as any of the key Star Wars factions, battles took place on both land and in space, kicking off just before the original trilogy. With hero characters and a great slightly-branching campaign, it ticked enough boxes to keep all RTS players happy. Sure, it didn’t have the depth of, say, the Total War games. But the Total War games don’t have Tie Fighters.

The Phantom Menace was a pile of...bantha fodder. I’ll never forgive George Lucas for Jar Jar Binks, or for (spoiler alert!) killing off Darth Maul after having him on screen for about five minutes. But, it’s hard to argue against how exciting the Pod Racer scene was.

Turns out, it didn’t make for a bad game, either. Originally for the Nintendo 64 (Dreamcast, PS2 and even a superior arcade machine version - complete with full-scale racer cockpit - were eventually produced too), Star Wars Episode I: Racer turned the scene quite effortlessly into a racing title.

Somewhere between Wipeout and Mario Kart, it had a great campaign mode that let you upgrade parts for your pod racer, buying scrap from sleazy merchant Watto. With winding canyon courses that require you to do the floating-on-one-side-to-fit-through-a-chasm trick, it had a few heart-in-mouth moments, too.

There have been so many released, it’s difficult to remember that the LEGO games as we now know them kicked off in the Star Wars universe. Originally split across two titles, one focussing on each trilogy, LEGO Star Wars: The Complete Saga was the ultimate version pulling two sizeable games into one massive package.

Shrinking down the epic galaxy to cutesy proportions, each key scene from the movies is charmingly brought to life in block form. It’s packed full of unlockables and perfect for on-the-couch multiplayer with a young padawan in tow. A tie-in game done right.

Hands up if you remember this one first time around? Arguably the most influential game on this list, Atari’s vector-based take on the Star Wars universe was revolutionary in its day.

Though it seems quaint now, the super-fast line art and digitised voice over work of Star Wars Arcade seemed out of this world in 1983. Even know, the Death Star trench run as depicted here has its charm, a precursor to the on-rails shooters that would dominate arcades in the decades to come, as well as setting the standard for X-Wing flight sims of the future. Definitely worth popping a coin in if you manage to track down the machine still working in a dusty corner of an arcade somewhere.

The first in a trilogy of shoot-em-up platformers for the SNES, Super Star Wars was the strongest too.

Rock hard by today’s standards, at this point in the 90s it was one of the most colorful ways to experience the Star Wars universe in an interactive way. Letting you at turns control Luke, Han and Chewie (as well as a few amazing vehicle missions), you’ll see everything from the streets of Mos Eisley to the inside of a Sandcrawler to a climactic run through the Death Star.

Sure, it takes some liberties with the property (remember when Luke shot all the Jawas? Or when he was nearly killed by the giant green bunny rabbit thing?). But in the 16-bit era, this was as good as it got.

The Rogue Squadron pilots are really the unsung heroes of the Star Wars universe, taking down two Death Stars and an army of AT-ATs, and the Rogue Squadron series rightly shines a light on them.

A superb set of action-orientated flight sims, Rogue Squadron II: Rogue Leader was the best of the bunch. Putting you in control of practically every aerial ship at the Rebel Alliance’s disposal (as well as some Easter Egg secret craft) it looked stunning, making clever use of the Nintendo Gamecube hardware. It also had some cracking missions dotted all over the Star Wars universe, including a super-tough level over the mining planet Bespin.

A recent and very decent game, Star Wars Battlefront uses the full power of the forc...er...modern consoles and PCs to render and almost photo-real rendition of Star Wars’ most iconic battlegrounds.

Whether battling under the stomping feet of an AT-AT on Hoth or trundling around the Dune Sea with a thermal detonator in hands, Battlefront’s 40-player matches feel suitably epic. Superb visuals and fantastic sound effects make this first person shooter the most faithful look at the Star Wars universe in a game yet.

And it gets better. As of December 2016, PS4 players with access to the PlayStation VR headset get a totally free upgrade which unlocks...A VR X-WING MISSION. For a freebie, it’s phenomenal, putting you “inside” the cockpit of the iconic craft, ready to take on a whole fleet of Tie Fighters. Which segues nicely into our next game...

Often regarded as one of the greatest PC games of all time, let alone Star Wars games, Tie Fighter (the 1994 sequel to 1993’s Star Wars: X-Wing) turned the tables by letting you take the role of a dastardly Imperial pilot.

With a cracking story (painting the Empire as those upholding law and order, not villains), the first person cockpit action was supplemented by clever mission briefings and stunning visuals for the time. Many games (such as Force Unleashed) would later also run with the guilty pleasure of playing as the villains, but Tie Fighter felt brave for its direction.

It’s a bit hard to get into these days given the modern conveniences we’ve become used to, and the fact that Tie Fighter was best played with dedicated flight sim hardware that doesn’t really have any comparable modern day equivalent, but if you can get it up and running in its optimal state, it’s easy to fall in love with the Dark Side all over again.

Could there have ever been any other game to top this list? Taking BioWare’s expertise from the Baldur’s Gate RPG series and transporting it to the Star Wars universe, Star Wars: Knights of the Old Republic is a classic role playing game, and RPG genre tentpole to boot.

Superbly written (and cleverly set many years before he influence of ANY Star Wars films’ events can affect its narrative untowardly), Knights of the Old Republic was a galaxy spanning tale with memorable characters, a smart combat system and some wonderful locations.

Though it released first on the original Xbox, it’s now easily playable on PC, Mac and all major mobile platforms – so there’s no excuses to not dive back into this classic title, which holds up surprisingly well to this day.

Here’s hoping BioWare will one day be allowed to visit that (offline) galaxy far, far away once more.